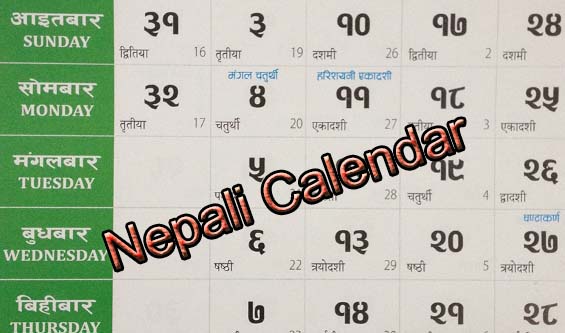 Welcome to you in our Nepali Calendar page, here you can get access to the Nepali Calendar of current year. The “Nepali calendar” is an official Bikram sambat calendar of Nepal. It is approximately 56 years and 8 and a half months in advance of the Gregorian calendar (A.D). Unlike Gregorian months, the lengths of nepali calendar months are not predetermined, and adjustment from year to year, differs from 29 days to 32 days. So, this Nepali calendar gives you the precise day with social occasions and festivals of Nepal of the current year 2072 B.S for both Gregorian and Nepali calendar with each other. Nepali calendar is the official Nepali calender which include Bikram Sambat calendar and it is also known as “Nepali Patro“. Bikram Sambat, initially begun by King Vikramaditya in Ujjain (the then independent nation in South Asia). Though it is identified by the Hindu community in Nepal, India and World, it is the official calendar of Nepal and for this reason globally called as the Nepali Calendar. The year of the Bikram Sambat starts from the first month Baisakh and finishes in Chaitra. The Nepalese new year falls in the middle of April from the English Calendar. It is a multicultural calendar and provides all the Hindu festivals and governmental holidays. This calendar also includes the Tithi which is required to the Hindu people for organizing any pooja and cultural events.

Nepali calendar is used on all governmental and non-governmental offices in Nepal. The public holidays, events and cultural events are marked in this Calendar so people living on any place, village, city and region can use it. For example Holi is one of the popular festival in Nepal but people in Terai region celebrate in different day as the people in the Hilly region celebrate in the next day. But the Holiday is marked in the calendar both tha day with a note where the Holiday if for. These years lot of public religious holiday are cut off from Nepali calendar like Bishwakarma Pooja. Also There are festivals like Teej which is one of the biggest festival celebrated by Nepalese women all over the world. You can get the good days also known as “Subha Shahit” for marriage and Bratabandha ceremony as available in our calender. You can access the whole one year calendar of the year 2072 BS to check the important dates as we have made it available here.