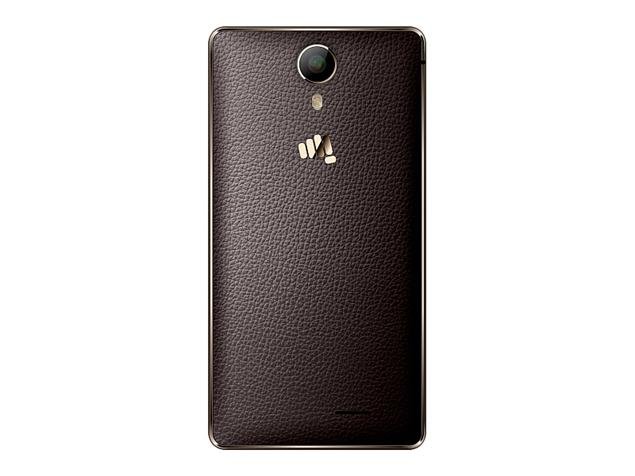 The Micromax Canvas 5 Lite is built up of plastic and aluminum body. The sides of the device receive aluminum framework, whereas, the rear is made up of a plastic. Despites of being plastic-made, the rear panel receives a leather-look which makes the device looks premium. The rear part is slightly curved which helps to easily hold it.

The device features an earpiece and a front facing camera, different sensors at the top bezels. The device also possesses the capacitive home, recent app and back buttons at the bottom bezels, however, are not supported by backlit functionality. Moreover, at the rear the device acquires the rear facing camera, a LED flashlight, Micromax branding and speaker grille.

Moreover, at the top, the device features a 3.5 mm headphone socket. The device, just like other smartphones of Micromax, possesses a power button and the volume adjusting keys at the right side. At the bottom, the device equips a primary mic and a micro USB port. The SIM card slots and microSD card slot is featured under the back panel.

Besides, Micromax Canvas 5 Lite gets shipped running with Android 5.1 Lollipop. The device operates with Mediatek MT6735P chipset, Quad-Core 1.3 GHz Cortex-A53 CPU, and Mali-T70MP2 GPU. Further, the device comes with 16 GB of internal memory which can later be expanded up to 32 GB. The device, further, comes with 2 GB of RAM.

Similarly, the Micromax Canvas 5 Lite carries with 8 MP, f/2.0 aperture lens rear facing camera and single LED flashlight at its back. The rear camera also obtains different features that allow capture us perfect pictures and also is able to shoot HD videos at 720 x 1280 pixels. The device, further, is equipped with 2 MP of front facing camera.

Furthermore, the Micromax Canvas 5 Lite features 2000 mAh removable battery. The device, just like low and mid-ranged smartphones of Micromax, is not supported by fast charging functionality. The battery, however, is good and can be used for a whole day with full charge. In conclusion, the device is good regarding its budget.