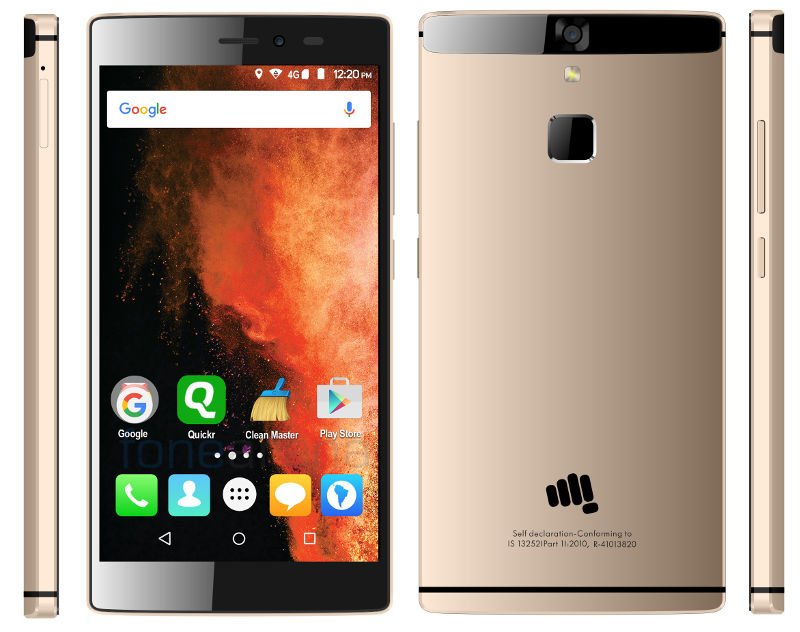 The Micromax Canvas 6, unlike its predecessor, is completely made up of aluminum body. The device is sharp on both front and rear part which makes difficult to handle the device. The device, futher, features 2.5D curved corning gorilla glass in the front which makes it look premium. The device also has less bezel at the front.

The device features an earpiece on the top of the screen followed by a front facing camera, different sensors, and a front facing LED flashlight below the earpiece. Moreover, the device obtains the capacitive home, recent app and back buttons in the screen. The device carries rear facing camera, a dual tone LED flashlight along with the Micromax logo and a fingerprint sensor at the rear.

The Micromax Canvas 6 acquires power button and volume adjusting buttons at the right side. Moreover, the device features the hybrid SIM card slot at the left side. The device acquires earphone port at its top and micro USB port and a microphone at the bottom.

The Micromax Canvas 6 runs Android 5.1 Lollipop out of the box and soon get the Android 6.0 Marshmallow update. Further, the device is furnished with Mediatek MT6795 Helio X10 chipset, Octa-Core 2.0 GHz Cortex-A53 CPU, and PowerVR G6200 graphic processing unit. Also, the device equips 32 GB of internal memory and 3 GB of RAM. The device, further, possesses a microSD card slot which helps to expand the memory up to 64 GB.

Besides, the Micromax Canvas 6 has sported 13 MP, f/2.0 aperture lens, autofocus rear facing camera on. However, the device features only single LED flashlight. The rear camera features the manual mode which allows to adjust the ISO. Also, the rear camera is able to shoot full HD videos at 1920 x 1080 pixels. The device, furthermore, comes with 8 MP front facing camera, but lacks front facing LED flashlight. Nevertheless, the camera is not good enough as of the A5 (2016).

Similarly, the Micromax Canvas 6 is equipped with 3000 mAh non-removable battery. However, the device, just like other mid-range smartphones and its predecessor, lacks fast charging functionality. However, the battery is good and may give a nice backup. The device is available on gold color.