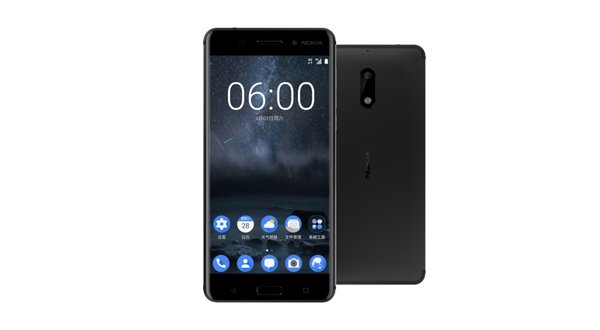 “Nokia”, whenever we hear this name we think of the mobile phone which made our childhood and teenage memorable. The company was one of the successful mobile manufacturers which had manufactured mobile phones that were chose by maximum people. However, the company lost it’s reputation and market from the time it launched Windows phone, and sold itself to Microsoft.

After a long gap, the company, Nokia is back with its Android smartphone, the Nokia 3, Nokia and Nokia 6. The Nokia 6 is the eldest sibling among the three phones. The Nokia 6, just like its younger sibling, the Nokia 5, is made up of metal unibody. The design also looks identical to its two young siblings. The front part of this device too is protected with gorilla glass and the device has less bezels than its brothers.

Looking the device from the front, we can find some changes made in the Nokia 6. The front facing camera has been moved towards the left and the sensors are moved towards the right. Coming to the bottom, users can find a physical home button surrounded by the capacitive touch keys. Also, the home button works as a fingerprint sensor.

The device, further, features power button and a volume adjusting keys at the right hand side of its body. Likewise, the left hand side of the device possesses a SIM card/micro SD card slot. The top part contains a 3.5 mm earphone port and at the bottom, users can find a micro USB 2.0 port along with a speaker and a primary mic. Similarly, the device possesses a rear camera, a flashlight and a secondary mic.

Moreover, Nokia, to make it look like an eldest brother, has featured bigger 5.5 inches IPS LCD screen with the resolution of 1080 x 1920 pixels. The screen is good as per the price range of the device. The screen is bright and the color production is good. The colors produced by the screen are vibrant and saturated. The viewing angles are also good, and the screen is also clearly visible under the bright sunlight.

Besides, Nokia ships the Nokia 6 running with Android 7.1.1 Nougat. Further, the Nokia is clocked with Qualcomm MSM8937 Snapdragon 430 chipset, Octa-Core 1.4 GHz Cortex-A53 CPU, and Adreno 505 GPU. Also, the device comes with 32 GB of internal memory and 3 GB of RAM. The storage of the device can later be extended up to 128 GB using a SD card.

Furthermore, Nokia has sported 16 MP rear facing camera in the Nokia 6. The rear camera does it’s job very well in the daylight, however, the image quality may degrade in the lowlight condition. Besides, the device is featured with 8 MP front facing camera. The front camera also does it’s job very well. The front camera allows users to take perfect selfies.

Additionally, the Nokia 6 is powered with Li-Ion 3000 mAh battery. The battery has a good backup just like brothers. And unlike the Nokia 3 and 5, the Nokia 6 is equipped with a feature of fast charging, which makes it a little bit standard.