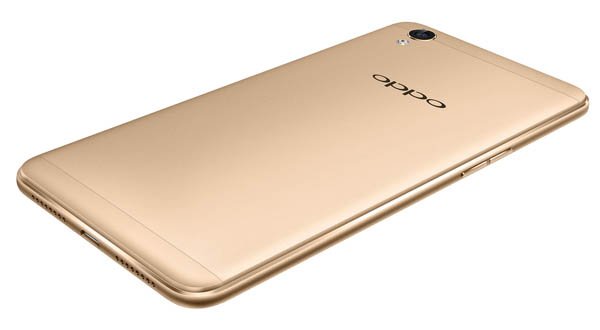 A Chinese company named Oppo, which used to manufacture Blu-ray disc, too entered in the world of smartphones on 2008 to provide a new taste to the users. Following the trend of manufacturing smartphones, the same company released a smartphone named Oppo A37 on June, 2016. And today we are reviewing the same device.

The Oppo A37 looks a lot like the Apple’s iPhone 6s from both front and rear side. The Oppo A37 despites of being a mid-range smartphone, is made out of a metal. The device, just like the Galaxy A5 2016 and other smartphones, receives the 2.5D curved corning gorilla 4 glass at the front which makes the device look premium. The bezels are a little bit thick, however, the device looks classy.

The Oppo A37 features an earpiece, front facing camera and sensors on both sides on the top bezel. Aldo, the device features capacitive touch home, recent app and back buttons below the screen. However, the capacitive keys are deprived of backlit which can be pointed out as a disadvantage.

Furthermore, the Oppo A37 possesses a 3.5 mm earphone port at the top of its body. Similarly, the bottom of the device includes a micro USB port followed by a primary microphone and a speaker grille around it. However, we can notice that the device lacks a secondary mic. The right side of the device carries SIM cards and microSD card tray, whereas, the left side of the device is comprised of volume alteration keys. Besides, the device features main camera and a flashlight below it at the top-right corner on the back part.

Moreover, the Oppo A37 is featured with 5.0 inches IPS LCD capacitive touchscreen having the 720 x 1280 pixels HD resolution and ~294 ppi pixels density. The screen is bright enough to use without any problem. However, the color production of the screen is not so attractive. The device has got good viewing angle because of the curved glass over the screen.

Besides, the Oppo A37 is operated with Android 5.1 Lollipop which is not upgradable to any new OS launched by Android. Further, the device, under the hood, is powered with Qualcomm MSM8916 Snapdragon 410 chipset, Quad-Core 1.2 GHz Cortex-A53 CPU and Adreno 306 GPU. Also, the device comes with 2 GB of RAM and 16 GB of internal memory which can further be expanded to 128 GB with the help of a microSD card.

Further, the A37 is powered with users’ non-removable Li-Po 2630 mAh battery. However, the device is deprived of fast charging which can be noticed in many mid-range smartphones. Nevertheless, the battery is good as it can give backup for more than 7 hours by charging once. Besides, the device is available in gold and rose gold colors.