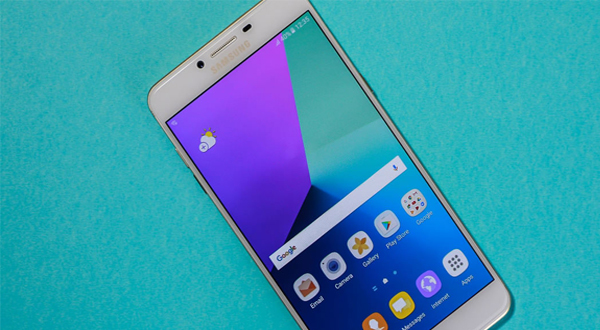 Samsung Electronics Co., Ltd. is a multi-brand company which has been servicing the world by producing and selling different types of electrical appliances and other military products for over 70 years. Samsung Electronics Co., Ltd introduced a new smartphone named the Samsung Galaxy C9 Pro on November 2016 in the selected region and later released it on October 2016 in India. Like other devices, the Galaxy C9 Pro is also an Android smartphone that comes up many new characteristics/features that was unseen in previous devices launched by Samsung Electronics.

The Samsung Galaxy C9 Pro is made up of metal and glass and just like other smartphones of Samsung Electronics, has got the same design. The device has got an earpiece on the brink on its front part along with front facing camera and different sensors. The home button exists below the screen having recent app button and back button on each sides. The home button works as a fingerprint sensor. And because C9 Pro comes in the list of ultra mid-range devices range, it is supported by backlit functionality and has got notification LED light.

Speaking about the display, the Samsung Galaxy C9 Pro has been furnished with 6.0 inches Super AMOLED 2.5D curved glass screen with 1080 x 1920 pixels with 367 ppi pixel density. The device has got bright display, viewing angles too are good and provide vibrant color output. The Galaxy C9 Pro, because of S AMOLED screen, is easy to use under sunlight. The display screen is not that much glazed and it also doesn’t captivate fingerprints. Moreover, the device has got an option to change the screen system that helps you to optimize the color sharpness, saturation and range of the display. The display has also got an option of Blue light filter which helps you to filter the blue light from the screen. The phone also comes with an Always-on display which was previously featured on S7 Edge and has been featured on A Series 2017 Edition.

The Samsung Galaxy C9 Pro has been shipped with Android 6.0 Marshmallow, and Samsung has not declared when the device will get Android 7.0 Nougat update. The Samsung Galaxy C9 Pro has been furnished with Qualcomm MSM8976 Snapdragon 653 chipset and Octa-Core (4×1.95 GHz Cortex-A72 and 4×1.4 GHz Cortex A-53) CPU. Talking about the graphic processor, the device comes with Adreno 510 GPU. The phone comes with 64 GB of internal memory which can be later expanded to 256 GB using a microSD card. The main attraction of this phone is that it comes with 6 GB of RAM. This is the first device manufactured by Samsung Electronics which has got 6 GB of RAM.

Besides, the Samsung Galaxy C9 Pro has been equipped with 16 MP, f/1.9, phase detection, autofocus rear camera. The device comes with dual LED (dual tone) rear flashlight. The main camera has got different features like panorama, face detection, geo-tagging, touch focus, HDR and so on. The camera really captures nice photos at daytime and also at night. Coming to the front camera, the device has been provided with 16 MP front facing camera. The front facing camera features beauty mode to take better self-portraits.

Moreover, the device has been packed with 4000 mAh non-removable battery. The battery, as it has high capacity can be used for a longer period of time. Just like other mid and high-end devices, the Samsung Galaxy C9 Pro has been supported by the fast charging functionality. This means that the device won’t  take long to get it’s battery charged.