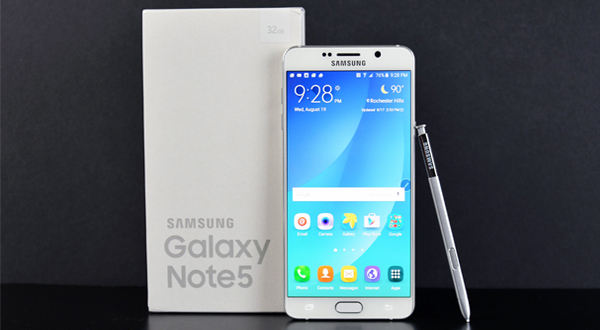 The Samsung Galaxy Note 5 Duos has been given the same look as of its predecessor Note 4. The device is broad having 153.2 x 76.1 x 7.6 mm height, width and depth. The device, just like S Series and A Series, is made up of metal and frame.  The device, at the rear part, has been curved which helps it to look a little bit classy compared to it’s predecessor Samsung Galaxy Note 4. And because the device is of Note Series, it supports S Pen.

Just like other smartphones manufactured by Samsung Electronics, the Galaxy Note5 Duos has got the same outline. The device has got an earpiece on the top on its front part along with front facing camera and different sensors. The home button exists below the screen having recent app button and back button on each sides. The home button works as a fingerprint sensor. Besides, the Samsung Galaxy Note 5 supports backlit functionality, and just like other devices of Note Series, it has got notification LED light. This function, nevertheless, can be seen in many high end devices. The Samsung Galaxy Note 5 has got a power button on the right-hand side. The volume adjusting keys have been placed on the left-hand side of the device. Furthermore, a mic, speaker grille and USB Type-B port has been placed at the bottom of the device. The secondary mic and SIM cards slot have been placed on the top of the device. The heart rate sensor has been placed along with the rear camera.

Talking about the display, the Samsung Galaxy Note 5 Duos has been equipped by 5.7 inches Super AMOLED capacitive touchscreen with 1440 x 2560 pixels with 515 ppi pixel density. The device has got colorful display, viewing angles too are good and provide vibrant color output. The Samsung Galaxy Note 5 has got ambient light sensor, which helps the users to use their device in intense lights without any problem. Furthermore, the device is furnished with Corning Gorilla Glass 4 from both front and back side of the device which protects the screen from scratches. The display screen is not that much glazed and it also doesn’t captivate fingerprints. Moreover, the device has got an alternative to change the screen’s display system that help the users optimize the color sharpness, saturation and range of the display.

The Samsung Galaxy Note 5, furthermore, runs Android 5.1.1 Loliipop out-of-the-box, which can later be updated to Android 6.0.1 Marshmallow. Similarly, the Samsung Galaxy Note 5 features Exynos 7420 Octa chipset and Octa-Core (4×2.1 GHz Cortex-A57 and 4×1.5 GHz Cortex-A53) CPU. Talking about the graphic processor, the device has been furnished by Mali-T760MP8 GPU. The device comes with 32 GB and 64 GB of internal memory. However, the device just like S6 and S6 Edge, lacks microSD card slot, which means the memory cannot be expanded according to the wish of the users. Besides, the device comes with 4 GB of RAM. Nevertheless, its predecessor the Samsung Galaxy Note 4 featured a microSD card slot to expand the memory.

Moreover, the Note 5 Duos has been packed with 16 MP, f/1.9 aperture lens, 28 mm, autofocus, OIS rear camera. The device, however, comes with single LED flashlight. The main camera has got different features like panorama, face detection, geo-tagging, touch focus, HDR and so on. The camera really captures good photos during daytime. Talking about the front camera, the device has been equipped with 5 MP, f/1.9 aperture lens, 22 mm front facing camera. The front facing camera features Auto HDR mode that helps you to take good pictures through the front camera. The rear camera also helps to capture the video at [email protected], [email protected]

Moreover, the device comes with Li-Po 3000 mAh non-removable battery. Furthermore, the Samsung Galaxy Note 5 just like S6, S6 Edge and their successors, supports Qi/PMA wireless charging. And yes, the device too supports fast charging functionality, which helps the users to get their battery charged in short period of time. However, its predecessor had Samsung Galaxy Note 4 had Li-Ion 3220 mAh removable battery, which too supported fast charging.