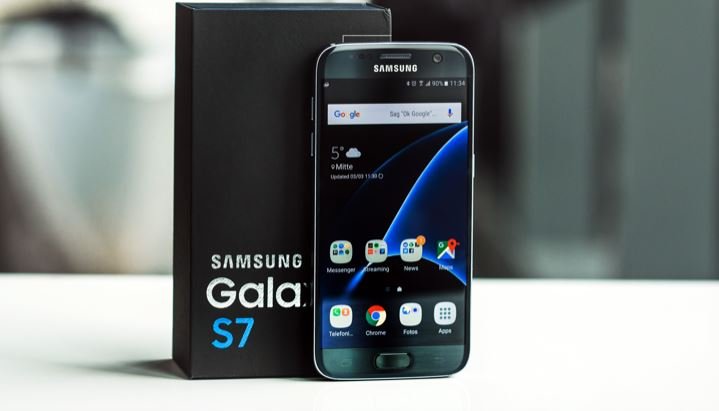 Today we are going to review one of the popular Samsung android mobile, Samsung Galaxy S7. Samsung Galaxy S7 is an Android smartphone manufactured by Samsung Electronics. The device, Galaxy S7 is the successor of Samsung Galaxy S6 and was officially announced during Samsung Press Conference at Mobile World Congress on 21st February, 2016. Just like its predecessor, S7 is produced with a display size of 5.1 inches screen, which maintains it’s standard. The device too was launched with its big brother, the Samsung Galaxy S7 Edge.

The design of Samsung Galaxy S7 is predominantly similar as its predecessor Samsung Galaxy S6. It holds on to metal and glass framework, but has made slight changes such as a squarer home button and a thinner bump for the camera.

The Samsung Galaxy S7 is IP68-certified water resistant and dust proof, and has 1440p Quad HD Super AMOLED display with 5.1 inches screen. Comparing with S6, S7 has larger battery with 3000 mAh and supports fast charging. Similarly, the device is furnished with an octa-core Exynos 8890 system on a chip and has 4 GB RAM. This device comprises either of 32 GB, 64 GB or 128 GB as an internal memory, but can be expanded using a microSD card which can help you not to delete any files, photos or videos. Talking about camera, Galaxy S7 features 12-megapixel rear-facing camera with a “Dual-Pixel” image sensor and f/1.7 aperture lens.

The Samsung Galaxy S7 runs Android Marshmallow from the box, but can be upgraded to Android Nougat which introduces different new features for the mobile phone.  Moreover, Samsung has added a new feature of “Always On” on Samsung Galaxy S7 which displays a clock, calendar, and notifications on-screen when the device is standby.