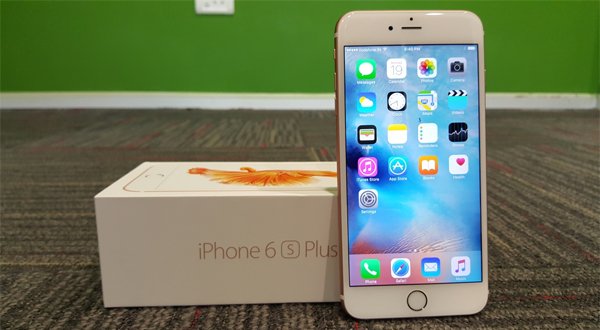 Since 2007, Apple Inc. has been manufacturing and marketing flagship a smartphone which was focused on the standard of the users. And giving continuity to the same tradition, Apple released it’s another flagship smartphone named Apple iPhone 6s Plus on September 2015, along with the iPhone 6s, its younger brother. And today we will review the same device.

The iPhone 6s Plus also looks alike to older iPhone from the front side. The device features an earpiece at the top bezel followed by front facing camera at the left and sensors above it. However, the device, despites of being a flagship device lacks notification LED light. Further, the device features a physical home button below the screen which also works as a fingerprint sensor.

The iPhone 6s Plus possesses a 2.0, reversible connector USB charging port followed by a primary microphone, a speaker grill and a 3.5 mm earphone port at the bottom. The right hand side of the device includes power key and SIM card tray below it. Likewise, the device features volume adjusting keys and silent key on the left hand side. The device, further, contains a rear facing camera, a dual tone LED flashlight and secondary microphone between them.

Moreover, the iPhone 6s Plus, as it is the big brother of iPhone 6s, features 5.5 inches LED-backlit IPS LCD retina display with the full HD resolution of 1080 x 1920 pixels (~401 ppi pixel density) resolution. The screen of the iPhone 6s Plus is brighter compared to the iPhone 6 Plus, however, not much more than that of iPhone 7 Plus. The color production of the screen is good as it produces vibrant and saturated color. The viewing angles of the device too are good, and this device too features 3D touch which was lacked in the 6 Plus.

Furthermore, the Apple iPhone 6s Plus run iOS 9.0 and is upgradable to iOS 10.3.2. Besides, the device is functioned with Apple A9 Fusion chipset, Dual-Core 1.84 GHz Twister CPU and PowerVR GT7600 (six-core graphics). Moreover, the iPhone 6s Plus is available in 16 GB, 32 GB, 64 GB and 128 GB internal memory and 2 GB of RAM. However, the device, just like other iPhones, lacks the microSD card tray.

Further, the device is equipped with 5 MP, f/2.2, 31 mm front facing camera and also acquires various features like face detection, HDR, panorama, etc. The main camera too helps users to take perfect self-portraits. Besides, the screen to glows up that helps to take perfect self-portraits in the night time. Moreover, the front camera too is capable of shooting both full HD and slow-mo videos at [email protected] and [email protected] respectively.

Besides, the iPhone 6s Plus is powered with Li-Ion 2750 mAh users’ non-removable battery. However, the device too is deprived of fast charging functionality which can be noticed in many iPhones launched in the market. Nevertheless, it predecessor featured Li-Po 2915 mAh battery. Anyway, the device is packed with powerful battery that gives backup for more than a day with the single charge. The Apple iPhone 6s Plus, besides, is available in three color variants; space gray, silver gold and rose gold.