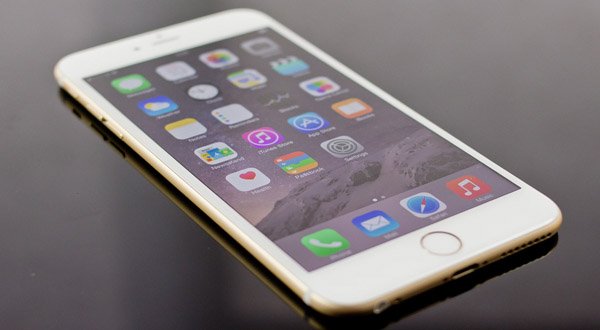 The top bezel of the Apple iPhone 6 Plus features an earpiece followed by front facing camera at the left and sensors above it. However, this device lacks notification LED light which could have been featured. Besides, the device acquires the physical home button below the screen which too works as a fingerprint sensor.

A 2.0, reversible connector USB charging port followed by a primary microphone, a speaker grill and a 3.5 mm earphone port is placed at the bottom of the device. The device, besides, features the power button on the right hand side along with the SIM card slot below it. Besides, the volume alteration keys and a silent button are placed on the left hand side of the device. Further, the device contains main camera, a dual tone LED flashlight and secondary microphone at the rear.

Moreover, the iPhone 6 Plus is built with 5.5 inches LED-backlit IPS LCD display featuring resolution of 1080 x 1920 pixels (~401 ppi pixel density) resolution. The screen produces vibrant, saturated and accurate colors. The device also possesses good viewing angles. However, the screen is not good as of the iPhone 6s Plus. Also, this device is also lacked of a 3D touch display which was later seen in iPhone 6s Plus.

Furthermore, the Apple iPhone 6 Plus is operated with iOS 8.0 which can later be upgraded to iOS 10.3.2. Besides, the device is furnished with Apple A8 Fusion chipset, Dual-Core 1.4 GHz Typhoon (ARM v8-based) CPU and PowerVR GX6450 (quad-core graphics) GPU under the hood. Further, the iPhone 6 Plus is available in different variants like 16/64/128 GB ROM and 1 GB RAM DDR3.

Besides, the iPhone 6 Plus is equipped with Li-Ion 2915 mAh users’ non-removable battery. Nevertheless, the device despites of lacking fast charging gets it’s battery charged fast and also is able to give a nice battery backup. The device can go for more than 7 hours with the single charge. Besides, the iPhone 6 Plus is available in space gray, silver and gold colors.