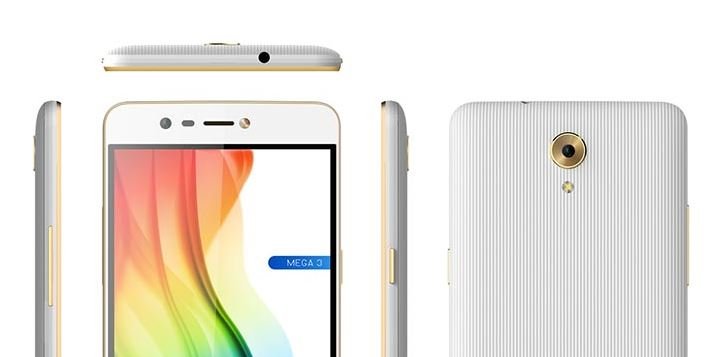 A Chinese multinational company known as Coolpad which manufactures and sells budget-friendly smartphone, released a smartphone named Coolpad Mega 3 on 2016, December, it’s another budget smartphone. And unlike other smartphone, the Coolpad Mega 3 was unique as it had 3 SIM cards slots. And today we will be reviewing the same device.

The Coolpad Mega 3, likely to many low and mid-ranged smartphones, is made out of a plastic body. Moreover, the device receives grips all over the rear panel which make the device easy-to-hold. Further, we can see that the device features protection of scratch resistant glass on the top of screen. And, the plastic and screen is attached in the metal framework.

The Coolpad Mega 3 features an earpiece at the top of the screen followed by a front facing camera and sensors on the left and front facing LED flashlight. Further, the device features the golden-color bordered capacitive touch home button, recent app button and back button below the screen. However, the capacitive touch keys are deprived of backlit.

Moreover, the Coolpad Mega 3 acquires 3.5 mm earphone port at the top of the device. Further, the device features the micro USB port and a primary microphone at the bottom. The volume alteration keys and a power button are placed on left hand and right hand sides respectively. Further, the triple SIM cards slots and microSD card slot are featured under the rear panel. The device, besides, acquires main camera and a flashlight at the rear. The rear also features a speaker at the bottom.

Furthermore, the Coolpad Mega 3 is featured with 5.5 inches IPS LCD screen, however, the device too features 720 x 1280 pixels HD resolution with ~267 ppi pixel density instead of full HD resolution. The screen produces vibrant and accurate color. The texts on the screen too are sharp and the viewing angles are also good. Also, the device features light sensor that automatically adjusts the screen’s brightness automatically.

The Coolpad Mega 3 is operated with Android 6.0 Marshmallow and features Cool UI. Further, the device is functioned with Mediatek MT6737 chipset, Quad-Core 1.2 GHz CPU, and Mali-T860 GPU. Besides, the Coolpad Mega 3 comes with 2 GB of RAM and 16 GB of internal memory which can later be expanded to 64 GB with the help of a microSD card.

Besides, the Coolpad Mega 3, likely to the Coolpad Mega 2.5D, too equips 8 MP, f/2.2 aperture, autofocus main camera supported by a single LED flashlight. The main camera possesses various features like geo-tagging, touch focus, face detection, HDR, panorama and so on. Moreover, the device, focusing on selfie, acquires 8 MP of front facing camera. The rear camera helps to capture good pictures in the daytime, nevertheless, does not works in lowlight condition. Coming to the front camera, the camera helps to capture good self-portraits outside and even inside as it features a front facing LED flashlight.

Additionally, the Coolpad Mega 3 is stocked with Li-Ion 3050 mAh users’ non-removable battery. Nevertheless, this device, just like other low and mid-range smartphones, lacks fast charging which is a disadvantage. Anyhow, the battery is good in terms of backup as it can go up to more 24 hours with a single charge. Also, the Mega 3 is available in champagne gold, moondust gray and gold white colors.