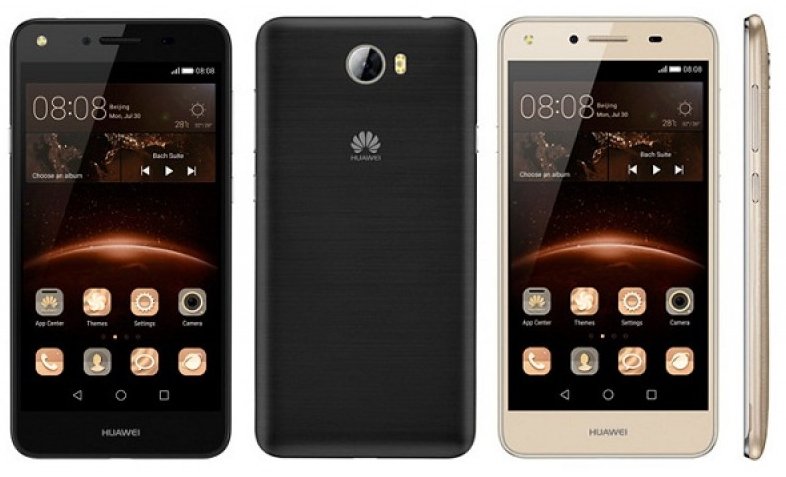 The Huawei Y 5 II obtains the identical design as of the other devices manufactured by Huawei. The body is completely made up of plastic, however, we can see that the rear panel has got metallic like finish. We also can notice that the device lacks protection of gorilla glass. Moreover, we can detect that an earpiece on the top of its screen followed by front facing camera, a notification LED light and different sensors on its forepart. The  device also features a front facing LED flashlight  at its front.The home, recent app and back button are linked in the screen.

Moreover, the device’s body is featured by the volume alteration keys at the right-hand side of the device’s body and a power button below it. Besides, we can perceive an easy key on the left-hand side of its body. The easy key is a shortcut key to open any applications without going in the menu. At the top of the body, we can see a 3.5 mm earphone socket followed by an active noise cancellation mic. An USB port and a mic at the bottom of the body can also be noticed. The SIM cards slots and microSD card slot is featured beneath rear panel. The main facing camera and a LED flashlight feature at the rear end of its body.

The Huawei Y 5 II acquires a body of 143.8 x 72 x 8.9 mm dimension having 5.0 inches IPS LCD capacitive touchscreen. The display features the resolution of 720 x 1280 pixels having ~294 ppi pixels density. The device’s screen is specific, clear and bright enough to use under light. Moreover, the devices features light sensor which enables the users to use device on outdoors as well. In conclusion, the device has good display screen.

The Android v5.1 Lollipop can be seen as an operating system in the Huawei Y 5 II. Moreover, the device comes with Mediatek MT6582 chipset.  Similarly, the device obtains Quad-Core 1.3 GHz Cortex-A7 CPU and Mali-400MP2 GPU. Packed with these processors, the Huawei Y 5 II features 8 GB of ROM and 1 GB of RAM. Moreover, the Huawei Y 5 II is available having 4G network compatibility and different processors. Additionally, ee can mark 8 MP, f/2.0 aperture lens, autofocus camera at the rear part of Huawei Y 5II. The rear camera has been furnished by different features.  Furthermore, the device comes with 2 MP front facing camera.

A removable battery of 2200 mAh can be seen in the device. But, unfortunately the device lacks both fast charging and power saving mode which is featured to charge battery faster and save the battery respectively. The battery may give nice battery backup. The device is available in artic white, rose pink, sand gold, sky blue and obsidian black colors.