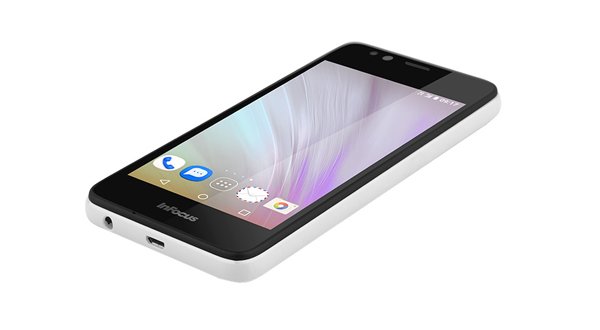 Nowadays, the companies from all around the world are actively manufacturing smartphones that are attractive and can be purchased by the budget conscious users. In this same trend, an American company named InFocus which already had been manufacturing other electronic wares, started to manufacturing budget-end smartphones. And giving continuity to this tradition, InFocus released another budget oriented smartphone, InFocus Bingo 20, and today we will be reviewing the same device.

The InFocus Bingo 20, likely to other entry level budget smartphones, is completely made out of a plastic. The device is not big enough and can easily be held in the hand. The rear panel receives textures over it which makes the device look quite stylish and provides grip to hold. The bezels on the front are thick, however, the device overall looks nice.

The InFocus Bingo 20 features an earpiece on the top bezels along with the front facing camera and front facing LED flashlight. Further, the capacitive touch home button, recent app button and back button are attached into the screen. And the bottom bezel contains the “InFocus” branding.

Moreover, the InFocus Bingo 20 features 4.5 inches capacitive touchscreen LCD display with the resolution of 480 x 854 pixels. The device, despites of being entry level, produces vibrant and saturated colors. However, the viewing angles are not good as the display gets pixelized as tilted through all sides. The device too lacks light sensor, which means should manually adjust screen’s brightness to use it under intense light. However, the InFocus M370 was provided with the light sensor which makes it more user convenient device.

The InFocus, further, ships the Bingo 20 operating with Android 6.0 Marshmallow which can be taken as a good thing. Also, the device features company’s own user interface Inlife UI 2.0. Besides, the Bingo 20 is operated with Shark L(SC9830) chipset, Quad-Core 1.5 GHz CPU under the hood. Further, the InFocus Bingo is stocked with 1 GB of RAM and 8 GB of internal memory which is expandable to 64 GB.

Furthermore, InFocus Bingo 20 is equipped with 8 MP, auto focus main camera. The main camera too comes with various features which allow users to capture good shots. Further, the device also features 5 MP of front facing camera that too shoots good self-portraits. Also, the front camera is supported by a LED flashlight that helps us taking good photos even in the lowlight condition.

Additionally, the device is powered with 2300 mAh removable battery. However, the device, as it lies in the entry level range, lacks the fast charging functionality. Anyway, the battery, speaking in terms of backup is good, as it can go for more than 7 hours or more than that with a single charge. The device is available in blue, white and orange colors.