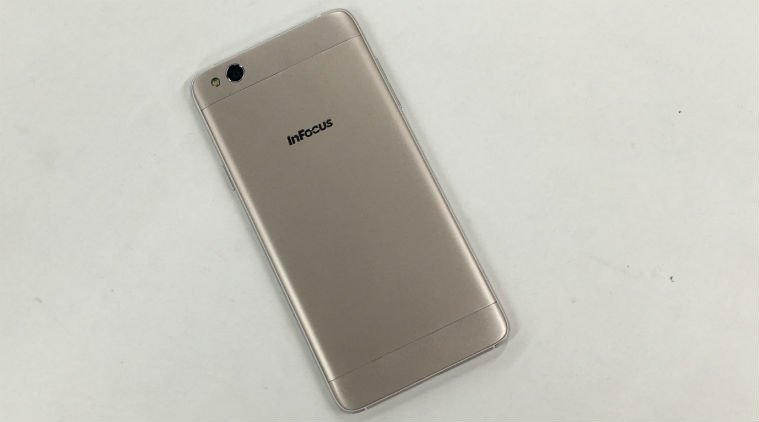 An American brand, InFocus which has been manufacturing and marketing budget-end smartphones, released another smartphone known as InFocus M680, an attractive and budget-oriented smartphone, and today we will be reviewing the same device.

The InFocus M680 features an earpiece at the top followed by a front facing camera on the left side, various sensors on the right and “InFocus” branding below it. Further, we can see the capacitive touch home, recent applications, and back button featured below the screen. However, the capacitive keys are deprived of backlit.

Furthermore, the top part of the InFocus M680 features the 3.5 mm earphone port, likewise, the micro USB port is placed at the bottom of the device followed by a primary microphone and a speaker grille. The device, besides, features the power button on the right hand side followed by hybrid dual SIM card tray above it. Similarly, the device comprises the volume alteration keys on the left hand side. The rear part of the device includes main camera and a flashlight.

Moreover, the InFocus M680, just like the InFocus Epic 1, comes with 5.5 inches IPS LCD capacitive touchscreen display. And the InFocus M680 features full HD resolution 1080 x 1920 pixels, whereas, the InFocus M535 featured only 720 x 1280 resolution. The color production of the screen is good as it produces vibrant and saturated colors. The device also possesses good viewing angle and the device too is featured with light sensor that automatically brightens up the screen when used under the bright light.

The InFocus M680, besides, is operated with Android 6.0 Marshmallow and also is featured with company’s own user interface Inlife UI 2.0. Besides, device is powered with Mediatek MT6753 chipset, Octa-Core 1.3 GHz CPU and Mali-T720MP2 GPU. Further, the InFocus M680 can be purchased having either 2 GB or 3 GB of RAM and 16 GB of internal memory. And the storage can later be expanded to 64 GB using a microSD card.

Furthermore, InFocus M680 is equipped with 13 MP, f/2.2 aperture lens auto focus main camera. The main camera, also, comes with various features that allow users to take perfect pictures. Moreover, the rear facing camera does it job quite well in the well-lit condition, however, the images of lowlight is not so attractive. The device, further, carries 13 MP of front facing camera which helps users to take some quality self-portraits.

In addition, the InFocus M680 is powered with 2600 mAh users’ non removable battery. Moreover, the device is deprived of fast charging which is noticeable in many devices manufactured by InFocus. However, the battery, in terms of backup is good. The device can be used for more than a day with the single charge. Also, the device is available in two colors; gold and white.