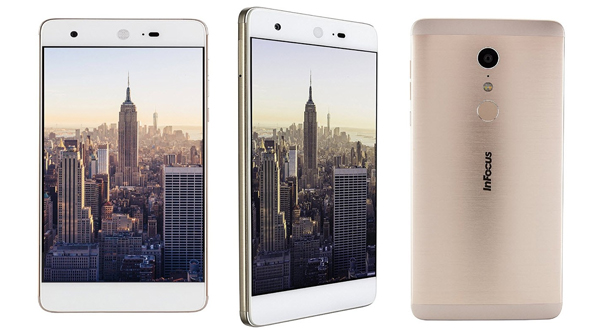 The InFocus Epic 1, as it lies in the high-end devices, is completely made out of metal unibody. Further, the device, unlike other smartphones of InFocus, features the protection of gorilla glass in the front which was lacked many devices of InFocus like InFocus M808, M680, etc. The rear panel of the device is also curved to provide comfortable grip to the users.

The InFocus Epic 1 features a uniquely designed earpiece at the top followed by a front facing camera at the left and sensors and a notification LED light at the right. Further, the device possesses capacitive touch home, recent app and back buttons in the display screen.

Furthermore, the InFocus Epic 1 acquires the 3.5 mm earphone port and an IR blaster on the top part. Likewise, the bottom part of the device possesses the micro USB Type-C port along with a primary microphone and a speaker grille. The right hand side of the device comprises of SIM cards and microSD card trays, similarly, the left hand side contains power button and volume alteration keys above it. Besides, the device features main camera, a secondary microphone, a LED flashlight and a fingerprint sensor on the rear.

Moreover, the InFocus Epic 1 is built with 5.5 inches LTPS IPS LCD capacitive touchscreen display featuring the full HD resolution of 1080 x 1920 pixels. The color reproduction of the screen is good as it produces vibrant, saturated and accurate colors. The texts too are sharp and the viewing angle of the device too is good. Further, the device is also featured with the light sensor which makes the device user-convenient by automatically adjusting screen brightness.

The InFocus Epic 1 runs Android 6.0 Marshmallow featuring InFocus’s own user interface Inlife UI 2.0. Besides, the device is operated with Mediatek MT6797M Helio X20 chipset, Deca-Core 2.1 GHz CPU and Mali-T880 GPU. Further, the InFocus Epic 1 is featured with 3 GB of RAM and 32 GB of internal memory which is further expandable to 128 GB using a microSD card.

In addition, the InFocus Epic 1 has been equipped with 3000 mAh non-removable battery. However, we are not sure if the device features or is deprived of fast charging. Moreover, the device is packed with powerful battery which is capable of giving backup for more than a day with the single charge.