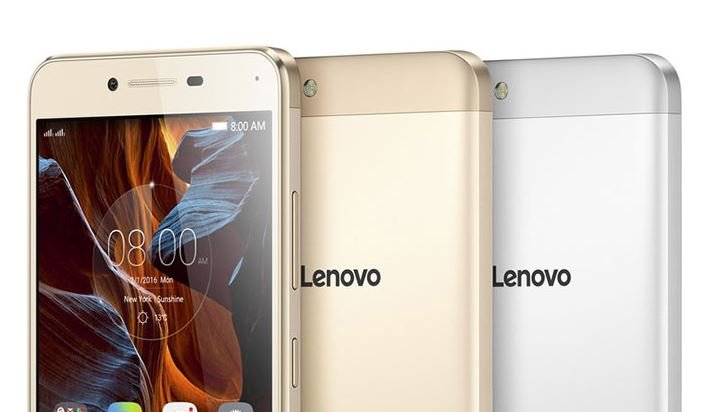 The Lenovo Vibe K5, just like other mid-range smartphones like ZTE Blade V7 Lite and others, is made up of a metal. However, the back panel is yet removable which gives access to the battery house. The rear panel receives slight curves on both sides which makes the device easy-to-hold. Moreover, the device, just like other normal smartphones of Lenovo, lacks the protection in the forepart.

The Lenovo Vibe K5 features an earpiece, a front facing camera and various sensors above the screen. Further, the device possesses a notification LED light next to the sensors. Moreover, the device features the capacitive keys at the bottom bezel. Nevertheless, these keys lack backlit which was visible in number of smartphones of Lenovo.

Moreover, the Lenovo Vibe K5 features a 3.5 mm earphone socket and the micro USB port on the top part. Similarly, primary microphone is placed on the bottom part. The device possesses volume keys and power key on the right side. Further, the back of the device contains main facing camera and a flashlight next to it on the right side and a secondary mic just below the camera. The dual speaker grilles too can be noticed on the rear bottom. And the speakers in the device too are loud. The SIM cards slots and microSD card slot too are placed under the back panel.

Moreover, the Lenovo Vibe K5 features Android 5.1 Lollipop. Besides, the device is functioned with Qualcomm MSM8929 Snapdragon 415 chipset, clocked with Octa-Core (4 x 1.5 GHz Cortex-A53 and 4 x 1.2 GHz Cortex-A53) CPU and Adreno 405 GPU. Furthermore, the device comes with 16 GB of ROM and 2 GB of RAM. Also, the storage can be expanded up to 32 GB using a microSD card.

Furthermore, the Lenovo Vibe K5 is furnished with 13 MP, f/2.2 aperture lens, autofocus rear facing camera helped by a LED flashlight. Besides, the device carries 5 MP of front facing camera which allows users to capture nice self-portraits. The main camera too is capable of capturing perfect shots in the daytime. However, image contains grain in the lowlight. Also, main camera helps to shoot full HD videos at 1920 x 1080 pixels.

Additionally, the Lenovo Vibe K5 equips Li-Ion 2750 mAh removable battery. Unluckily, the device despites of being a perfect cell phone, lacks fast charging. However, the device features good battery as the battery goes up to more than a day with single charge. The device, furthermore, is available in two different colors; silver and gold.