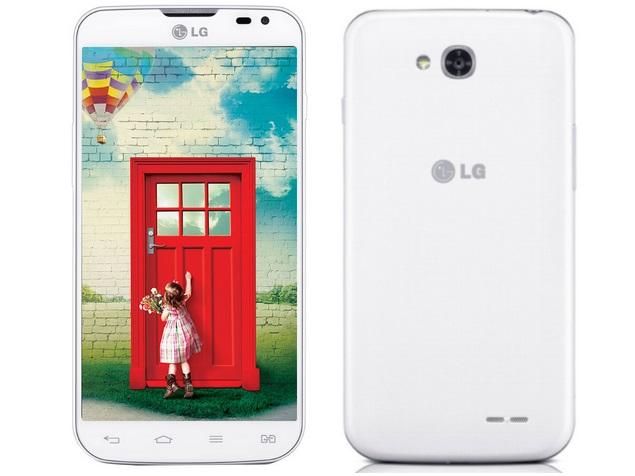 Unlike other devices, the LG Optimus L70 is also a mid-range smartphone like LG G Pro Lite and is completely made up of a plastic. The rear panel receives dots all over it which is visible in many other smartphones manufactured by LG. Moreover, the rear panel is also curved at the back, which allows users to hold the device easily.

The device, just like other smartphones, features an earpiece, the sensors, and front facing camera at the top bezel. The capacitive touch buttons are featured at the bottom bezel. However, they are not backlit supported. Further, the device features main camera, a LED flashlight and LG logo at the rear. The speaker can also be noticed at the bottom-right corner at the back.

The device features 3.5 mm earphone port at the top part and the micro USB port and a primary microphone at the bottom. The device also possesses volume adjusting keys at the left and the power button at the right sides respectively. Besides, the device ports the SIM cards slots and microSD card slot under the rear panel.

Furthermore, the LG Optimus L70 comes with 4.5 inches IPS LCD display with the resolution of 480 x 854 pixels and ~207 ppi pixels density. The screen produces good color and the viewing angles too are good because of the IPS technology. The device, despites of lacking light sensor, has received bright screen which allows users to use their device in intense light.

Further, the LG Optimus L70 is operated with Android 4.4.2 KitKat and is not upgradable to other software released by Android. The device, besides, is powered by Qualcomm MSM8210 Snapdragon 200 chipset, Dual-Core 1.2 GHz Cortex-A7 CPU and Adreno 302 GPU. The device also features 4 GB of internal memory which can later be expanded to 32 GB using a microSD card. The device, too, acquires 1 Giga Bytes of RAM.

Similarly, the LG Optimus L70 is packed with powerful Li-Ion 2100 mAh removable battery. The battery has got good backup and is usable throughout a day with single charge. The device is available in white, and black colors.