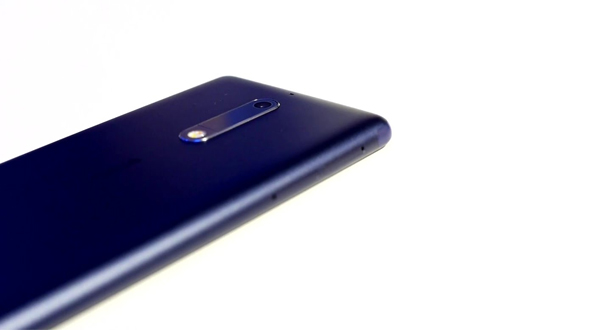 However, after a long gap of six years, HMD Global has introduced three Android smartphones under the name of Nokia; the Nokia 3, Nokia 5 and Nokia 6. The Nokia 5 can be said as the middle-brother in the lineup of the Nokia 3 and Nokia 6.

The Nokia 5, unlike the Nokia 3, is completely made out of a metal. The front of the device is protected with 2.5D curved corning gorilla glass. The rear panel and top and bottom parts of the device are also curved which makes the device easy-to-hold. The device is also less slippery despites.

Looking at the front part, users can find an earpiece at the top of the screen surrounded by a front facing camera at the left side and sensor as well as Nokia branding at the right. Coming to the bottom of the screen, users can see a physical home button along with recent app button and back button on each sides. The home button, further, works as a finger print sensor and the capacitive keys are supported with backlit.

Moreover, the right hand side of the Nokia 5 possesses a power button and volume adjusting keys just above it. The left hand side, further, possesses a SIM card and a micro SD card slot. The Nokia 5, besides, acquires a 3.5 mm earphone port at the top of its body, whereas, the bottom part contains micro USB 2.0 port, single speaker, and a microphone. Moving to the rear, the device comprises of a rear camera, a flashlight and a secondary mic.

The Nokia 5, besides, is equipped with 5.2 inches IPS LCD capacitive touchscreen having the resolution of 720 x 1280 pixels (~282 ppi pixel density). However, Nokia could have launched the Nokia 5 featuring 1080 x 1920 pixels screen. Nevertheless, the screen is bright enough to use the device under the sunlight. The colors are vibrant and saturated and the viewing angles are of average quality.

Additionally, the Nokia 5 is currently running on Android 7.1.1 Nougat. Further, Nokia has powered the Nokia 5 with Qualcomm MSM8937 Snapdragon 430 chipset, Octa-Core 1.4 GHz Cortex-A53 CPU, and Adreno 505 GPU. Similarly, the Nokia 5 has got the internal memory of 16 GB and RAM of 2 GB. Also, the device has got a micro SD card slot that allows users to extend memory up to 128 GB.

Furthermore, the Nokia 5 is boasted with 13 MP, f/2.0, phase detection autofocus rear facing camera. The camera comes with features like 1/3” sensor size, 1.12 µm pixel size, face detection, and so on which allow users to capture some really good photos. Also, the device comes with 8 MP front facing camera which is capable of shooting some nice selfies.

Further, Nokia has powered the Nokia 5 with 3000 mAh battery. The battery is good and has got a nice backup as per the capacity. The battery can go for a day without any problem. However, the device is lacked by fast charging functionality which is not a good thing.