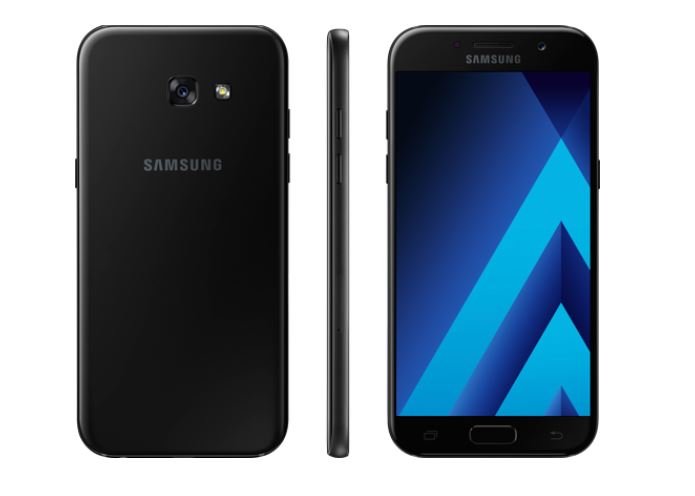 The Samsung Galaxy A5 (2017) has been built up with body design as of Samsung Galaxy S7 and S7 Edge which helps the device to look stylish and attractive. And because of the look almost all people may fail while guessing the price randomly.  The device, comparing to predecessor Galaxy A5 2016, is thin and may be little low-weighted too. Just like Samsung’s other smartphones, Galaxy A7 (2017) has got the same look. The device, in the forepart features an earpiece on the top, a front facing camera and has a proximity and accelerometer sensor alongside. There is a home button, a recent app button and a back button featured under the display of the gadget and the two recent app and back buttons have got backlit. This device too is protected by Corning Gorilla Glass 4 from the front and rear side. The new thing on display is Galaxy A5 (2017) has been featured by Always-on display.

Comparing about the display both with its predecessor A5 (2016) and Samsung Galaxy A5 (2017) has got 5.2 inches Super AMOLED screen and 1080 x 1920 pixels with 424 ppi pixel density. And because both devices has been featured by SAMOLED display both can be used under intense lighting.

Besides, talking about software, the Samsung Galaxy A7 (2017) runs Android 6.0 Marshmallow out-of-the-box. The device meets with Touch WIZ UI to overcome the previous problems of device lagging. Additionally, the device features some pre-loaded applications which can later be disabled. Also, Samsung has pre-installed some apps developed by Microsoft like Word, Excel and PowerPoint.

The device, Samsung Galaxy A5 (2017) has been packed with Exynos 7880 Octa Core 1.90 GHz Cortex –A53 processor, Mali-T830MP3 graphic processor and 3GB of RAM. Moreover, the Samsung Galaxy A5 (2017) comes with 32 GB of internal memory which can later be expanded upto 256 GB with the help of external microSD card. Moreover, its a huge success over its predecessor A5 (2016) which had only 2 GB of RAM and 16 GB of internal memory. The main issue of this device is it’s speaker. The speaker gets fully covered by hands while using the device in the landscape mode. The device supports fingerprint functionality which was also seen in predecessor Galaxy A5 (2016).

Talking about camera, there is a huge change in A5 (2016) and A5 (2017). The Samsung Galaxy A5 (2017) comes with 16 MP rear facing camera having f/1.9 aperture. Users can take good pictures in the bright light. The device features 16 MP front facing camera and has f/1.9 lens which helps you to capture perfect self-portraits. The front facing camera just like its predecessor lacks front LED flashlight.