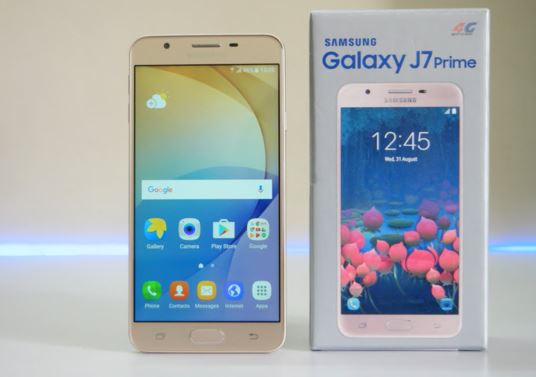 Talking about the look of Galaxy J7 Prime, the home button is placed below the display along with capacitive Recent and Back buttons in each side. The device, being built up of metal body and having rounded sides helps the user to hand it easily. The device bears 8mm of thickness and 5.5 inches of screen weighing 167 g. The device has been protected by 2.5D Corning Gorilla Glass at the front, but lacks in the rear.

The Samsung Galaxy J7 features a fingerprint scanner at home button which was missed in other devices of J-series. Similarly, the 3.55 mm headphone socket has been placed at the bottom along with USB Port. However, the speaker has been placed above the power button in the right side of the device. The device, moreover, features separate SIM and microSD cards slot which is a benefit over card slots which forced users to use either one SIM and microSD or two SIMs.

Moreover, the Samsung Galaxy J7 Prime features CMOS 13 MP rear camera along with LED Flashlight. The rear part of the device is not completely made up of metal, it comprises some plastic materials at the top and bottom, but has been furnished by metal color paints. The device features 8 MP of front camera which allows the users to take a decent selfie.

Samsung Galaxy J7 Prime has been furnished with Exynos 7870 Octa-Core 1.6 GHz Cortex-A53 processor. Furthermore, the device is equipped with Mali-T830MP2 graphic processor. The device comes with an inbuilt memory of 16 GB and 3 GB of RAM, where the memory can be extended upto 256 GB by using external microSD card.

The Samsung Galaxy J7 Prime runs Android 6.0 Marshmallow out-of-the-box and hope the device will soon get the update of Android 7.0 Nougat. Besides, the gadget is embellished with 3300 mAh battery which means users can have fun for longer period of time.