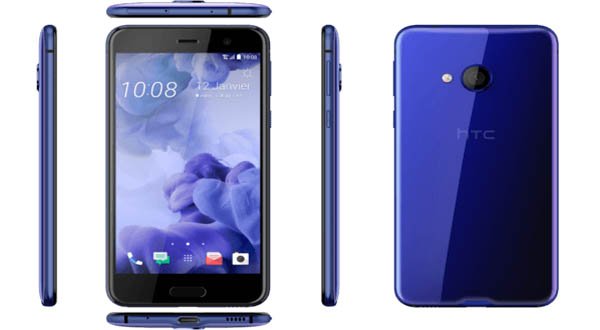 The HTC U Play, this time has replaced its traditional look (seen in HTC Desire 630, Desire 628, One X9) with new one. The front facing speaker has been removed in a different position and has made other visible changes in the device. Also, the device is completely made up of a corning gorilla glass from front and rear part.

The HTC U Play features an earpiece at the top along with the front facing camera, a notification LED light and different sensors. And this time HTC has made a little change in the device, the company has replaced the traditional capacitive touch home button with the physical one which also works as a fingerprint sensor. Further, the capacitive recent app and back buttons are placed alongside the home button.

The HTC U Play possesses the power key at the right-hand side of its body followed by the volume adjusting keys above it. The device too possess 3.5 mm earphone socket at the top and a micro USB port and a mic is placed at the bottom of the body. The device, further, features secondary mic and the SIM cards tray at the top. The bottom of the device comprises of USB Type-C port, primary mic and speaker grille at the bottom.

Moreover, the HTC U Play comes with 5.2 inches Super LCD capacitive touchscreen having the resolution of 1080 x 1920 pixels ~428 ppi pixel density. The screen produces vibrant, saturated and accurate colors. Further, the device too features light sensor which automatically adjusts the brightness in accordance to the environment. Also, the device has received a good viewing angle which makes the screen visible from all sides.

The HTC U Play is powered with Li-Ion 2500 mAh non-removable battery. And likely to other high-end devices, the U Play too is supported with fast charging functionality. Also, the device possesses powerful battery which can give backup for more than a day. Also, the device is available in four color variants; Brilliant Black, Cosmetic Pink, Ice White, Sapphire Blue.