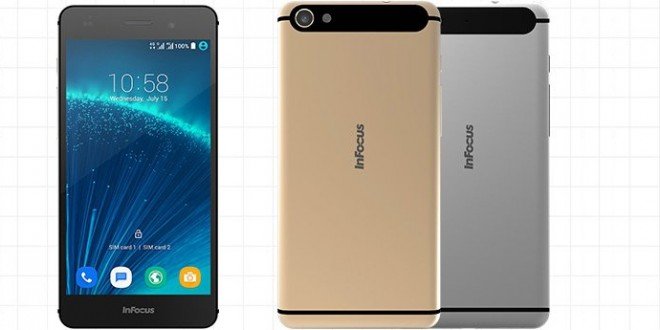 , InFocus again released it’s another budget-friendly mid-range smartphone known as the InFocus M808, and today we will review the same device.

The InFocus M808 looks premium from all the sides and the device is made out of a metal chassis and the rear panel also receives surrounded edges. However, the front part of the device is deprived of protective glass which is noticeable in InFocus Epic 1 and M680. Besides, the overall metal back and the display are attached in an anodized aluminum frame. Also, the device is 7.56 mm thick, which means the device can easily be held without any problem.

The InFocus M808 features an earpiece at the top followed by a front facing camera on the right side, various sensors on the left. Further, we can see the capacitive touch home, recent app and back buttons attached in the screen.

Furthermore, the InFocus M808 features the 3.5 mm earphone port on the top part. Likewise, the device possesses the micro USB port along with a primary microphone and a speaker grille on the bottom of the device. The right hand side of the device comprises of SIM cards and microSD card trays, similarly, the left hand side contains power button and volume alteration keys below it. Besides, the rear part includes rear facing camera and a LED flashlight.

Moreover, the InFocus M808 features 5.2 inches IPS LCD capacitive touchscreen display having full HD resolution of 1080 x 1920 pixels. The screen produces vibrant, saturated and detailed color. The viewing angles of the device too are good. However, the device is deprived of light sensor, which means users should manually adjust screen’s brightness in order to use the device under the bright lights.

The InFocus markets M808 running with Android 5.1 Lollipop and company’s own user interface Inlife UI. The device, besides, is furnished with Mediatek MT6753 chipset, Octa-Core 1.3 GHz CPU and Mali-T720 GPU. Further, the InFocus M808 is stocked with 2 GB of RAM and 16 GB of internal memory which can later be expanded to 128 GB using a microSD card.

In addition, the InFocus M808 has been powered with 2450 mAh non-removable battery. Besides, the device, just like other mid-range smartphones, is deprived of fast charging. Moreover, the device possesses a good battery which is able to give backup for more than a day with the single charge. Additionally, the device is available in metallic silver and metallic gold colors.