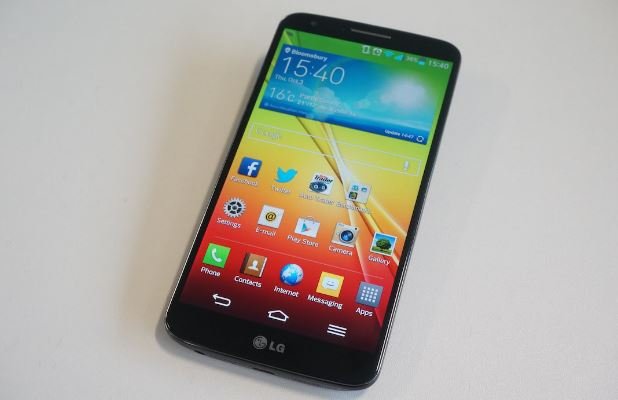 LG G2 is another flagship smartphone that was launched to compete with the Samsung Galaxy S4 and yes, today we are reviewing the particular device. LG is a famous company that manufactures all types of electric appliances which includes smartphones too and has marketed lots of smartphones. In the process of giving continuity to its tradition, LG released LG G2 on 2013, September, the predecessor of the LG G3.

The LG G2 looks alike to the Samsung Galaxy S4, the device has similar shape, similar curvature. The device is made up of a plastic and glass. The rear panel is made up of a glossy plastic and the fore part receives protection of gorilla glass. The sides, however, receives metal band all around it and has a big screen compared to S4. Moreover, the rear panel is also curved at the back, which allows users to hold the device easily.

The device features an earpiece, various sensors, front facing camera and a notification LED light at the top bezel and the capacitive buttons are featured on the screen. The device, besides, features main camera, a LED flashlight and LG logo at the rear. Moreover, the trend of volume adjusting keys and power keys at the rear part which was seen many devices of LG like LG L Bello, LG G2 Mini, etc. too was started from the device.

The device, further, features a secondary mic, and an antenna at the top part and carries the micro USB port, an earphone port, a speaker grille and a primary microphone at the bottom. The device also possesses volume adjusting keys at the left and the power button at the right sides respectively. Besides, the device ports the SIM cards slots and microSD card slot under the rear panel. The volume keys not only do job of adjusting volumes, but also works as shortcut keys while the screen is turned off.

Furthermore, the LG G2 comes with larger 5.2 inches True HD IPS LCD display with the full HD resolution of 1080 x 1920 pixels and ~424 ppi pixels density. The color output of the screen is vibrant, texts also are sharp and the viewing angles too are good. The device also features an ambient light sensor which automatically adjusts screen brightness under intense light.

Further, the LG G2 is operated with Android 4.2.2 Jelly Bean and can be upgraded to Android 5.0.2 Lollipop. The device, besides, features Qualcomm MSM8974 Snapdragon 800 chipset, Quad-Core 2.26 GHz Krait 400 CPU and Adreno 330 GPU. The device, further, comes with 32 GB of internal memory and 1 GB of RAM. The device also features a microSD card slot.

The LG G2, besides, is furnished with Li-Po 3000 mAh removable battery. The battery has got good backup and is usable throughout a day with single charge. The device features GRAM chipset, which saves battery life with 20% less comsumption. The device is available in white, red, gold and black colors.