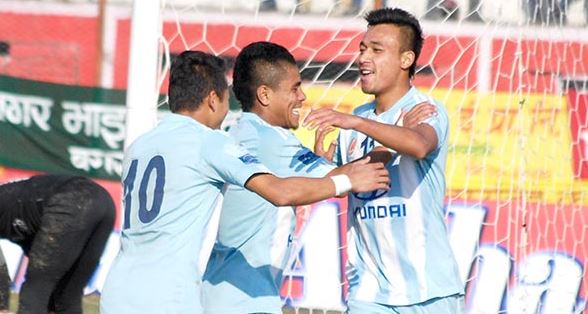 The Manang Marsyangdi Club, Machhindra, Police and the organizer, Sahara are now in the Semifinal. Sahara and Machhindra , Manang and Police will be playing in opposition to enter in the finals.

The game organized in Pokhara Stadium in which Manang has shown the leading sign by goaling within 9 minutes by Player, Anil Gurung. He has done cross goal with the help of Sujal Shrestha. But at the end of first half, Three Star player, Shiva Shrestha also did head goal but the referee of sides him.

In 52 minutes of the game, Sujal Shrestha hit another goal with the pass of Dipak Rai which led the Manang-Marsyangdi Club to the semifinal.

In the game, Sankata too has got so many chances to make goals but ultimately Manang wins the game by 2-0.