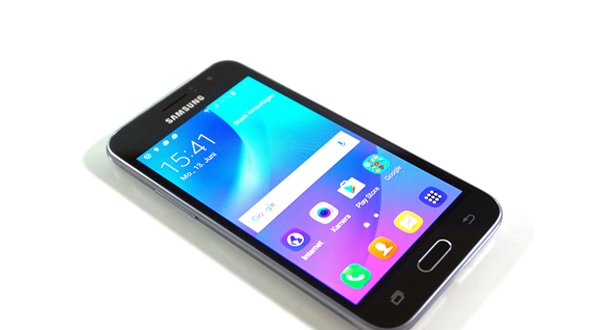 The Samsung Galaxy J1 (2016), because it lies in low range devices, is made up of metal (not completely) and plastic body. The device lacks the protection of Corning Gorilla Glass. Just like other smartphones manufactured by Samsung, the Samsung Galaxy J1 (2016) has got the same outline. The device has got an earpiece on the top on its front part along with front facing camera and different sensors. The home button exists below the screen having recent app button and back button on each sides. The home button, however, doesn’t works as a fingerprint sensor. Besides, the Samsung Galaxy J1 (2016) also lacks backlit functionality, and just like other low-range devices of Samsung, it is not supported by notification LED lamp.

Talking about the display, the Samsung Galaxy J1 (2016) has been equipped with 4.5 inches Super AMOLED capacitive touchscreen with 480 x 800 pixels ~207 ppi pixel density. The device has got good display screen, viewing angles are good, and provides vibrant color output. The Samsung Galaxy J1 (2016) too features ambient light sensor, which means the users should not manually adjust the brightness to use their device in intense lights.

The Samsung Galaxy J1 (2016) has been furnished by Android 5.1.1 Lollipop, but the device may not be updated to any other software launched by Android. Moreover, the Samsung J1 (2016) comes with Spreadtrum SC9830 chipset and Quad-Core 1.3 GHz Cortex-A7 CPU. Talking about the graphic processor, the device has been equipped by Mali-400 GPU. Further, the device is stocked with 1 GB of RAM and 8 GB of ROM which is expandable up to 128 GB.

Moreover, the Samsung Galaxy J1 (2016) has been supplied with 5 MP, f/2.2 aperture lens, autofocus, rear camera. The device, however, comes with single LED flashlight. The main camera has got different features like face detection, geo-tagging, touch focus, and so on. The camera captures good photos during daytime. Coming to the front camera, the device has been equipped with 2 MP front facing camera. The rear camera also helps to capture the video at [email protected]

Moreover, the device comes with Li-Ion 2050 mAh removable battery. Furthermore, the device, along with its successors, lacks adaptive fast charging functionality. The battery, however, is good compared to other low-range devices manufactured by Samsung. The device gives good battery backup, and can be used up to 10 h on talk time (3G) and up to 40 h on music play. Moreover, the device is available in white, black and gold color.