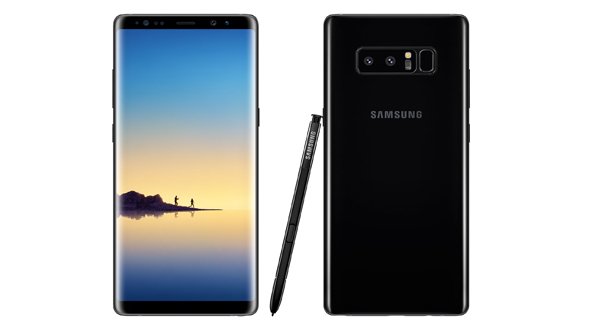 The Samsung Galaxy Note 8 features the identical design of the Samsung Galaxy S8 and S8+, and is protected by aluminum frames alongside its’ body which ensure the durability of the device. The Note 8, just like the S Series’ S8 and S8+ is water proof and dust proof. The device also possesses Stylus Pen instead of the normal pen which lets you to do more with your phone.

Talking about the physiques, the Samsung Galaxy Note 8 possesses a bezel-less screen (side) at the front along with an earpiece at the top followed by various sensors and front facing camera and of course notification LED light. The capacitive home button, recent app and back buttons can be found under the screen.

The Galaxy Note 8, besides possesses 3.1 Type-C 1.0 reversible connector at the bottom part of its body accompanied with a 3.5 mm earphone port, microphone and a speaker. The top part of the device possesses SIM card tray and a secondary microphone. The right hand side of the smartphone contains power button and the left side acquires volume buttons.

Moving towards display, the Samsung Galaxy Note 8 is equipped with 6.3 inches super AMOLED screen having the resolution of 1140 x 2960 pixels (~521 ppi density). The smartphone has got one of the best screen, color production is good, colors are vibrant, well saturated, and viewing angles are awesome. Besides, the screen is HDR10 compliant, the home button supports 3D support and has got Always-on display feature.

Coming towards camera, the Samsung Galaxy Note 8 is sported with dual 12 MP camera that lets you to take some really good photos. The first camera is of 26 mm and has aperture of f/1.7 that allows you to good shots in the lowlight condition. The second camera is of 52 mm and acquires aperture of f/2.4. Both two cameras gives you the power of taking high end portrait photos.

The Samsung Galaxy Note 8 has been powered with Li-Ion 3300 mAh battery, yet the battery has not got good backup capacity. Maybe Samsung doesn’t want to bring back the same issue that was found on the Galaxy Note 7. Besides, the smartphone supports fast charging and Qi/PMA wireless charging.