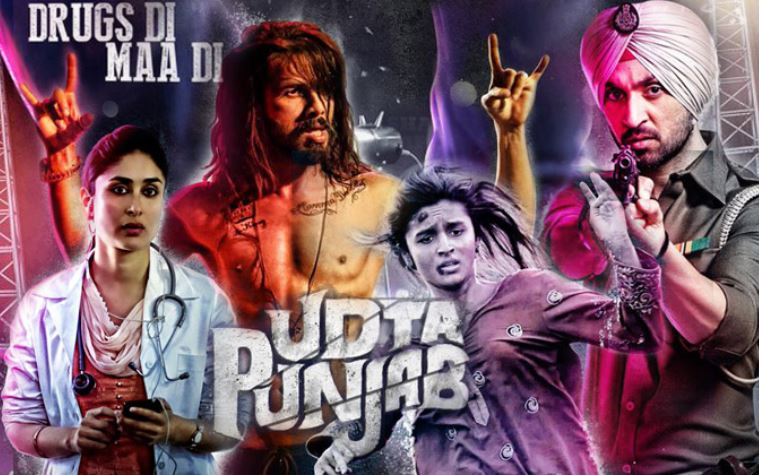 Udta Punjab revolves around four parallel story lines. It tracks the life of a rockstar, a Bihari migrant, a Sikh cop, and a doctor. The film is produced by Shobha Kapoor and Ekta Kapoor under their production banner Balaji  Motion Pictures. The movie is directed by Abhishek Chaubey. It stars Shahid Kapoor, Alia Bhatt, Kareena Kapoor Khan, and Diljit Dosanjh in major roles. It also stars Satish Kaushik and Prabhjot Singh in supporting roles.

Udta Punjab is a powerful story told with dramatic flair. It tries hard not to venture too far from reality between the powerful drug dealers and politicians. The film has kept in touch with the reality of current times and develops each character into the drama beautifully. The four principal characters of the movie are imperfect in their own ways, however not beyond redemption. When the four of them finally realize their wrong doings, they begin their journey of redemption. The emotional drama that ensues will keep you glued to your seats. Although the film may seem long (two and half hour running time), each scene of the movie is critical to the storyline and takes the story forward. Most of the dialogues are mostly in Punjabi and are filled with expletives. Every character seems authentic and takes the audiences into the world of a drug addict Punjabi Rockstar, corrupt cops, and difficult immigrant life. With perfect combination of dark humor and cynicism, Udta Punjab brings alive the drug infused world of a corrupt lifestyle.

Shahid Kapoor, with a tattoo covered torso, plays the role of a coke-sniffing rockstar to perfection. He plunges head first into the world of mayhem and chaos. Diljit Dosanjh, in his first Hindi movie, does not put a foot wrong in his role as a cop trying to break free from the system. He even lends his voice to the movie’s most defining musical piece, which is a Batalvi poem with music composed by Amit Trivedi. Alia plays the role of a fighting migrant extremely well. Her character never loses the will to fight despite the hardship she faces. She is the towering highlight of the movie.

After opening strongly in it’s opening weekend, Udta Punjab took a big dip at the box office the following Monday. Udta Punjab has collected an impressive Rs. 38.3 crores in just four days, however maximum of those earnings were collected on the first three days. The breakup of the collection for the first four days was: Friday – Rs. 10.05 crores, Saturday – Rs. 11.25 crores, Sunday – Rs. 12.50 crores, Monday – Rs. 4.50 crores. The decline was attributed at 55%. However, the film is expected to gross Rs. 49 crores in the first week of release. Despite the online leak of the censored copy just 40 hours before its release, Udta Punjab got a good response at the ticket windows. Udta Punjab earned maximum revenue in the North and in multiplexes of the major metros.