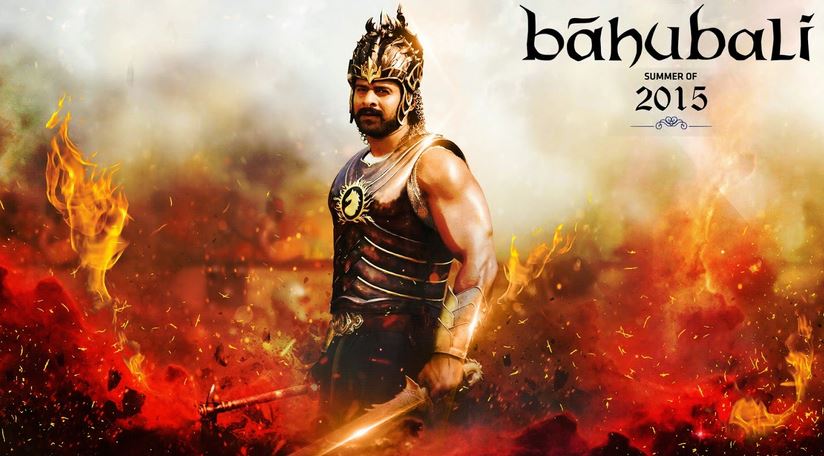 “Bahubali” is yet another gem from the treasure chest of S S Rajamouli, the phenomenal Telugu film maker who has not delivered a single flop till date. What makes it more special is the fact that it is the biggest Indian movie ever made, with a whopping budget of Rs 250 crore. That raises the expectations from the movie too, but it has indeed been able to live up to them. With an impressive star cast comprising of Prabhas, Anushka Shetty, Tamannaah, Sathyaraj, Ramya Krishnan and Rana Dagubatti, the film excels at all fronts. It is an epic saga, with the best of special effects, performances, narration and sets. “Bahubali” has truly taken the Indian cinema at par with Hollywood.

“Bahubali” narrates the story of a young prince of Mahishmati, Shiva (Prabhas), who was estranged from his royal family as a child and raised by a tribe in a village, for the sake of protection. As he grows up, he shows the signs of his royal lineage with his courage, power and nobility. In comes Avanthika (Tamannaah), who is a female warrior of a rebel group and what follows is a silly romantic track between the two of them.

But the track is important in the sense that it marks the real beginning of the movie when Avanthika takes Shiva to his lost kingdom, which is now being ruled by the self loving, tyrant ruler, Bhallal Dev (Rana Dagubatti). From here on, the movie goes to an entirely different dimension, narrating the flashback story of the conflict in the royal family, which led to Shiva being given in the custody of the tribal people, away from his real family. What follows is the most impressive part of the movie, the battle between Prabhas and Rana, which brings on the memories of the Hollywood thrill blaster “Lord of the Rings”. The half an hour war sequence takes the Indian cinema to a new level, setting stage for the second part of “Bahubali”, which is going to rock the theaters in 2016.

With “Bahubali”, S S Rajamouli has proved once again why he is one of the most successful film makers today. Both Prabhas and Rana look impressive in the mucular avatars as the “Bahubali” and the antagonist respectively. Tamannaah’s presence is ornamental though. The other members of the star cast have done justice to their characters in the movie. It is the screenplay, though which the real star of the film is, and so are the special effects. The sets are truly magnificent and the cinematography is impressive. Rajamouli has churned out a complete package, which is going to be remembered as one of the greatest movie of India.

The movie hit 4200 screens all over the world and was released in multiple languages, including Telugu, Tamil, Hindi and English. The box office collections of “Bahubali” have been as impressive as the film itself, with a record worldwide opening day collection of Rs 60 crore. With the 100 crore mark reached within the first weekend only, the movie is all set to create a new benchmark for the Indian cinema and has already broken all records set by Bollywood. Most impressively, the movie has touched a figure of Rs 355 crore till now and is likely to reach the phenomenal figure of Rs 400 crore soon, creating history in the Indian cinema. And surprisingly, it has hardly been affected by the release of the Salman Khan starrer “Bajrangi Bhaijaan”!