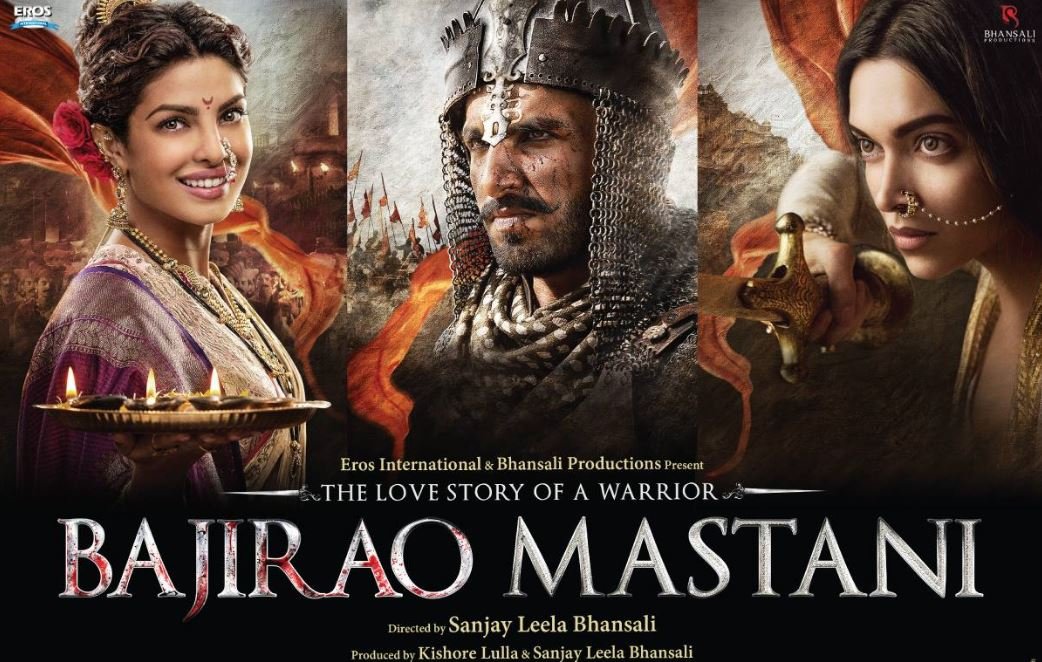 The pre Christmas weekend has been a big one for the Indian movie buffs, with two phenomenal releases “Dilwale” and “Bajirao Mastani” to have hit the cinemas. The latter is an extravagant period film by the acclaimed director Sanjay Leela Bhansali. Based on the life story of the historical hero Peshwa Bajirao, this one focuses on his love life. Ranveer Singh plays the lead role, while Deepika Padukone and Priyanka Chopra form the other two ends of the love triangle. Others in the star cast include Mahesh Manjrekar, Tanvi Aazmi and Milind Soman. The movie has been hyped and promoted to become one of the most awaited ones of the year.

“Bajirao Mastani” is the legend of the 18th century Maratha warrior, Peshwa Bajirao (Ranveer Singh), who deservingly earns his title due to his skill, bravery and intelligence. He played a key role in establishing Hindu rule in the Indian sub continent, but the movie is focused more on the love crusades of the married Peshwa. He is approached by the half Rajput half Muslim Mastani (Deepika Padukone), the princess of Bundelkhan, to protect her kingdom from enemies, which he does. In the course of it, Mastani falls in passionate love with Bajirao and the feelings are mutual. As Bajirao returns to Pune to his wife Kashibai (Priyanka Chopra), Mastani follows him, only to face humiliation at the hands of his mother (Tanvi Azmi). Despite all the sufferings, Mastani stays strong and finds her place in Bajirao’s life, bearing him a son in time. The film portrays the exceptional love of these star crossed lovers, despite the objections of religion, family and society, and at the same time, the anguish of the first wife. There is a plethora of emotions depicted in it, love, passion, longing and courage and this is done really well.

The three pivotal characters have portrayed their roles to perfection. Ranveer Singh has undoubtedly given the best performance of his career in “Bajirao Mastani”, while Deepika and Priyanka have been exemplary too. The supporting star cast has been equally impressive in their performances. The two and a half hour long film seems slow at stretches, but with the direction of Sanjay Leela Bhansali and the amazing performances by the entire star cast, it comes across as an absolute visual delight. The second half makes the film exciting, as the two women are shown pitted against each other. The music is absolutely haunting, the scale grand and sets lavish, making it a fare not to miss. The costumes and cinematography make it even more watchable. The movie has had its share of controversy too, as it has faced objections at the hand of the descendents of the Peshwa, but in Bollywood, negative publicity also works in favor. Leaing that part aside, “Bajirao Mastani” proves that history is not always boring!

“Bajirao Mastani” released on 18th December, 2015 and is expected to make excellent collections, with the estimates going up to Rs 12-12.5 crore for the opening day collections. Also, the movie is anticipated to cross the 100 crore mark during its run.