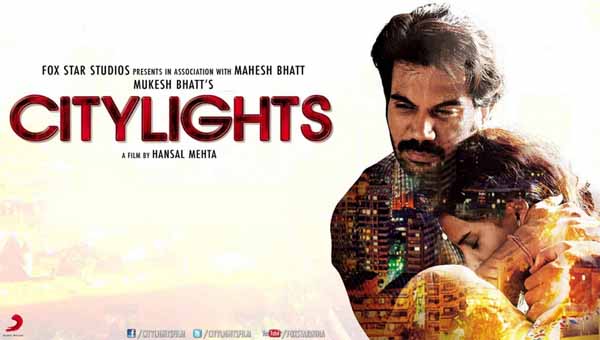 Starting with the farming techniques of a farmer in Rajasthan, the film is an official adaptation of a British Film by the name Metro Manila.

The story revolves around the protagonist, Deepak, his wife and their 6-year-old daughter. Raj Kumar Rao plays an ex-army officer returning after an early retirement. After his village in Rajasthan proves to be inhabitable because of the debtors, who give space to neither sleep nor breathe, he promises his young wife and the little kid about the Never-land that Mumbai is.
He reaches Mumbai upon the trust of a man he was acquainted with back in the village. The money runs out steadfast and Deepak realises the impossibility that lies on his head to make ends meet if he does not find a job in the immediate. Deepak struggles and search all around the city with no luck for days. The film stresses on the universality of how cruel a city generally is, to everyone who lives in it. It is merely to survive in a city and never to live!

The film emphasis the power of coincidence based on the arbitrariness of the little lives that is catalyzed to live a decade more at times, because of a random subtle’s worth. This effect paves way to ironies in the limelight, in the film. After the face of his despair distract itself in a wink for a little while, Deepak gets a job as a supervisor at a security firm all because of a brilliant dialogue preceded by a story. The irony makes the importance again, when Deepak loses his shelter and ends up living in an under-construction 3BHK which is luckily in his budget because of its limiting basic amenities else, should cost him an odd 3 crores!

Rajkumar Rao portrays his character through every thick and thin without any limit or exhaustion, which makes the audience actually contemplate Raj Kumar Rao himself struggling through the ends and tails of the big city to reach until his stardom today. The acting is applauded and accoladed by all critics and the Acting Award that Rao received is indeed a gem to appreciate his work in the industry. The struggle that Deepak faces is akin to any a common man of the village making his debut to the big cities with their dreams bigger than the city and its skyscrapers. The poor man’s saga is not just heart –rendering, but nerve wracking when Deepak’s portrays the twisting face of his own fate popping up its evil head each time. The paralysis of poverty and its vicious despair is knitted with an exceptional acting from both the lead actors. Patralekha who plays Deepak’s wife, also does an amazing job of the illiterate villager woman, as per the critics.

The movie has been rated four stars, upon five by the film critic Subhash Jha.

The film is produced under the low budget of 2 crore and has collected around 4 crore till date.