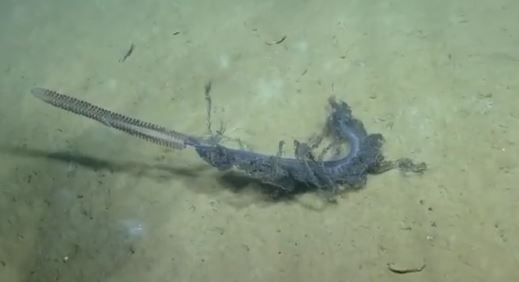 We don’t need to explore the Universe to find amazing creature as there are plenty of them on Earth. Yes the same words proves once again after a team from the Nautilus Live expedition who were piloting a remotely operated vehicle inside sea explored one of the most fascinating lifeforms in the world called Purple Siphonophore which is one of the rare creature found till date.

The NLE crew (Nautilus Live Expedition) find it hard to believe as a living creature when they first saw that.

R.R. Helm from the Deep Sea News writer  calls it a “shocking shade”, remarking that this footage truly stands out.

Well if we go through it appears to be a jellyfish like creature but while watching from near we can see a roving colony made up of thousands of individual organisms called zooids which contribute with one another to form the whole body.

Here goes the exclusive Video Footage as the video was released online via Youtube (Nautilus Live).