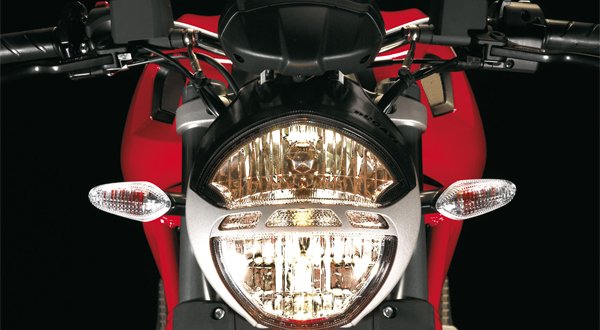 Ducati Monster is a well-known series of motorcycle manufactured by an Italian company, Ducati. The Series consists of various varieties of the Monster motorcycles like the Monster 1200, Monster 1200 R, Monster 796, etc. and the 696 is also one among them. The Ducati Monster 696 was first introduced in the year 2008 and the bike lasted for the year 2014. The successor of the 696 variant is the Ducati 796 variant.

The Ducati Monster 696 features same body design as of other Monster variants. However, the bike has got less engraved fuel tank, and the bike also looks smaller than other variants of the Monster. The headlight has also been surrounded with round unique-designed plastic. The under-seat dual exhausts also make the motorcycle look attractive. Further, the Monster 696 has been built on steel trellis frame and a lightweight aluminum subframe.

Moreover, the Ducati Monster 696 has got the height and length of 1060 mm and 2100 mm respectively. Also, the front wheel of the bike is 1450 mm far from the rear one and the bike after carrying its all parts weighs 161 kg.

Furthermore, Ducati ha powered the motorcycle with l-twin, 2 desmodromically actuated valves per cylinder, air cooled engine which is capable of providing maximum power of 78.9 bhp and maximum torque of 69 Nm along with displacement of 696 cc. Further, the motorcycle has been equipped with 43 mm upside-down forks front suspension and progressive linkage with preload and rebound adjustable rear mono suspension.

In Nepal, Ducati has been exporting the Monster 696 under the dealership of Turbo Motors Trading.