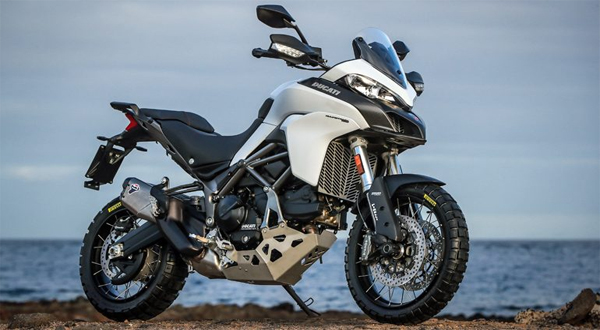 The Ducati Multistrada is a series of dual sports motorcycles manufactured by Ducati since 2003. The first motorcycle to be launched in the series was of 992 cc. However, with the passage of time, Ducati updated the motorcycle in all areas like the appearance, engine, performance and so on. In the year 2010, Ducati launched the high-end version of the Ducati Multistrada 1200. Nevertheless, the bike cannot be afforded by all the people or may be some people do not like to ride high-speed motorbikes that’s why, Ducati revealed the entry level Multistrada.

Moreover, the Ducati Multistrada 950 features height of 1470 mm and is 2280 mm long. Also, the bike has got width of 995 mm and is 229 mm heavy. Besides, the front wheel of the bike is 1594 mm far from the rear wheel. Further, Ducati has equipped testastretta, L-Twin cylinder, 4 valve per cylinder, Mono Spark, desmodromic, liquid cooled engine in the bike. The particular engine provides max power and torque of 113 bhp @ 9000 RPM and 96.2 Nm @ 7750 RPM respectively.