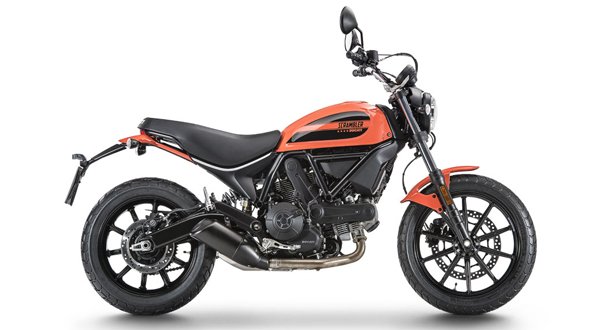 The Scrambler Sixty2 too has been built on the same body design as of other bikes in the Scrambler series. However, the Sixty2 variant has specially been manufactured for the youths. The Scrambler Sixty2 has been featured with new slim tank with combined tank cover which makes it better than other varieties of Scrambler. The graphics featured on the bike also makes it look attractive and the company has made the bike available in three eye catching colors; Atomic Tangerine, Ocean Grey and Shining Black.

The Scrambler Sixty2 variant has got total height of 1165 mm including the brakes, and is 2150 mm long. Also, the width of the bike including the rear view mirrors is 860 mm, and the bike after carrying it’s all parts weighs 183 kg. Besides, the front wheel and the rear wheel maintain the gap of 1460 mm with each other.

Moreover, Ducati has powered the motorcycle with L-twin cylinder, desmodromic distribution, 2 valves per cylinder, air cooled engine. The engine, further, is capable of producing maximum power of 41 bhp @ 8750 RPM and maximum torque of 34.6 Nm @ 8000 RPM along with displacement of 399 cc.

Furthermore, Ducati has been exporting the Scrambler Sixty2 in Nepal under the dealership of Turbo Motors Trading.