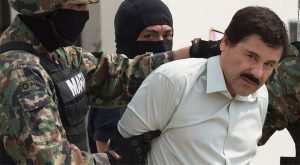 El Chapo Guzman, real name as Joaquin Archvaldo Guzman Loera is a Mexican drug lord, the head of Sinaloa Catel, a criminal organization named after Mexican Pacific coast state of Sinaloa. Born from the poor family in rural community of La Tuna, Badiraguato, Sinaloa, Mexico, El Chapo is listed as the most powerful drug trafficker in the world by the United States Department of the Treasury. In his early age, he used to sell Marijuana at commercial centers. Through the earned money, his father used to spend most of the profits on liquor and women. So, tired of management, El Chapo started cultivating own marijuana plantation with his cousins. About his nickname “El Chapo”, he had earned the name during his adolescence because of his short height, stature and stocky physical appearance. If his 20s, he had left his home town Badiraguato and joined organized crime.

The first job of El Chapo was to report Hector “El Guero” Palma, a drug lord under the umbrella of the Guadelarjara Cartel. For the drug lord, he used to coordinate smugglers and their deliveries from the Sierra Madre Mountains to urban areas near the US-Mexico Border. He used to shot a bullet to the head of the deliverers, if anyone miss the product, deliver late or tapered. This gave him a lot of respect among his superiors, as it was hard to deny El Chapo’s request to deliver more and more drugs. With the pass of time, he gained even more trust among his superiors. With his increasing trust, he became the chauffeur for Guadelarjara Cartel’s leader: Miguel Angel Felix Gallardo. As becoming the chauffeur, his responsible increased to bring the drugs from Colombia to the Mexican border towns. In November 1984, El Chapo’s boss Felix Gallardo was arrested. After the arrest, summit was conducted to discuss about handling the future of their business. With the conclude of the summit, he earned a seat at the table. By winning the seat for handling the business, he was put in charge of the drug corridors of Tecate, Baja California and Mexicali and San Luis Rio Colorado. For increasing the business for Sinaloa Cartel, he and his associates purchased the land and property under the fake names with his money. In short time, he was the owner of dozens of properties. In the apartment, mansion and ranches he owned, his drugs were grown and packed.

From 1987 to 1990, he involved in his first organized crime. He had organized the shipment of 1,600 pounds of marijuana and 10,50o pounds of cocaine. The return from the shipment, he earned $1.5 million for one route. In another route he earned $100k for 35 tons of drugs over three years. With his increasing responsibility, he came up with idea of shipping massive amounts of cocaine in chili pepper cans to USA through train. For the deal of chili pepper cans, he was provided with lot of briefcase stuffed with millions of dollars. For making Mexican police officials shut their mouth against El Chapo, he had spent more than $10 million for them. After he was acclaimed for being responsible for the Cardinal’s death, he left the Sinaloa Cartel associates for a short time. He travelled away from the company, but his travel result in his arrest while he was hiding near the Mexico-Guatemala Border. During his time in jail, the Sinaloa Cartel was run under the direction of his brother Arturo Guzman Loera. Being behind the bars also, he was making a lot of money. In 2001, a prison guard named Francisco “El Chito” walked him outside the gates through a laundry trolley. For the jailbreak, he had to pay more than $2 million.

From 2009 to 2011, Forbes had placed him as the 10th richest Mexican in the world with a net worth of $1 billion dollars at that time. It is also believed that after Carlos Slim, the richest man in the world, he is the second most powerful Mexican. Since he is the head of the world’s most notorious drug Cartel, he earns a net worth of $1.4 billion. He has this much of money though his ability to run the Sinaloa Cartel. With $1.4 billion, El Chapo has become one of the world’s wealthiest drug lord.

Things to know about El Chapo

El Chapo Net Worth: Between $2 Billion and $4 Billion (Estimated)