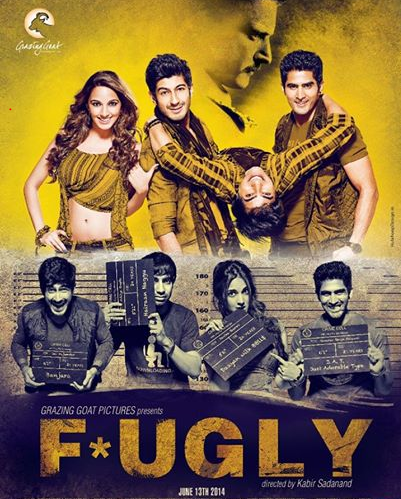 It seems that Bollywood is trying to bring the bitter reality to the audience through movies. Fugly is yet another recently released movie that you can relate to personal life. This fresh and youth centric drama movie is directed by Kabir Sadanand. However, the plotline of most of the movies is similar.

Fugly movie is about four youngsters’ or rather four childhood friends Dev, Devi, Gaurav, and Aditya. All new faces freshen up the movie and make it more vibrant and young. The national boxer Vijendra Singh is also seen in the movie as Gaurav and communicates in Haryana tone that will surely charm you. The movie is shot in lanes of Delhi and exotic parts of Ladak.

Each one has different desires and dreams and look forward to achieve them someday. But being a typical Hindi cinema, all their dreams comes to a halt when they come against the tough and rude cop played by Jimmy Sheirgill. The actor plays a strong role after many years and has been appreciated for his fine acting skills in the movie.

The friendship and bond of these friends are tested in the movie when they are in a dreadful situation and finding ways to escape from the cop. The initial part of the movie can be seen as friends enjoying with each other and going out of their way to help. The entry of the cop makes the movie turn to a new concept. Jimmy plays the perfect role of the cop and builds up an atmosphere of tension couple of times. However, there are loopholes in this movie too that you just cannot ignore.

The director has tried his best to show as real as possible and therefore some scenes may not convenience you as they are just not linkable. For instance, the fact of a TV reporter interviewing a critically burnt patient will not digest you. The conclusion of the movie surely is what makes the movie worth watching.

The soundtrack of the movie is what will catch your attention at instance. The hype that was created with the song YehFuglyFuglykya Hai will get you know only after you watch the movie. Kiara and Jimmy have both performed powerfully. The cinematography is handled by Milind Jog who managed to capture beautiful visuals.

Fugly was casted with new and young talent which has rolled the eyes of everyone with its Box office collection. On opening day, the movie made a good collection of 2.25 Crore and ended the week with a total collection of 11.16 Crore. The movie got grand opening in regions of Haryana and Delhi due to high popularity of the Haryana boy Vijendra Singh. Besides, the Akshay Kumar fans largely contributed to the collection. Overall, the movie made a fair collection at the box office.

Above all, Fugly is a decent youth centric movie that focuses on the realities and problems faced by the today’s young generation.