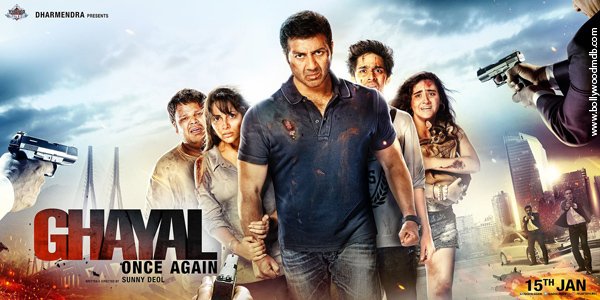 The 1990 release “Ghayal” has been a milestone in the career of the ultimate action star of Bollywood, Sunny Deol and his power packed performance in the movie fetched him the prestigious National Award. He comes back with the sequel called “Ghayal Once Again”, which co-stars him with Soha Ali Khan, Narendra Jha and Om Puri. While “Ghayal” was directed by the veteran director Raj Kumar Santoshi, the movie has been directed by none other than Sunny Deol himself. The much awaited movie released on 5th February, 2016.

The sequel has Ajay Mehra (Sunny Deol) play the owner of an investigative newspaper, out to expose anti social elements and uncover the truth. As he returns from the sentence of 14 years in the prison, he makes a comeback as a concerned citizen, trying to bring justice for the common man through his publication. He comes across a gripping case when a murder footage captured accidentally by four young students is handed over to him. In his quest for truth, Ajay comes across the fact that the crime has some powerful figures involved in it. This time, Ajay’s enemies are the corrupt system and a businessman called Bansal, portrayed by Narendra Jha. What follows is a relentless chase, where the goons try to abduct the teenagers and Sunny is determined to bail them out, Like its prequel, “Ghayal Once Again” has its share of action and combat, though it lives up to the modern time with technological improvements like phone tapping and hacking.

No one can ever forget the powerful action and emotional performance of Sunny Deol in “Ghayal” and Sunny has made all the efforts to live up to the benchmark with “Ghayal Once Again”. But the latter fails to match the standards set by the prequel, particularly on the emotional front, though the action is good enough. Sunny has been impressive as usual, while Soha Ali Khan does justice to her character. All the four teenagers have done a fair job in the movie. The most unconvincing part of the movie is the fact that no one used the social media to bring to light such heinous crimes being committed so openly. “Ghayal Once Again” cannot be called a flawless film, but this one too possesses the idealism of a typical Sunny Deol movie, complete with the focus on the power of common people when they are tortured too much by the system.

Sunny Deol has always been called the one man army of Bollywood and he has lived up to this reputation with his latest release “Ghayal Once Again”, a film where he has also shown his flair for direction. Sixteen long years after the prequel, this one seems to have maintained its touch. “Ghayal Once Again” has made excellent collections of Rs 14.85 crore in the first two days only, with Rs 7.20 crore on the opening day, followed by an equally impressive Rs 7.65 crore on the second day.