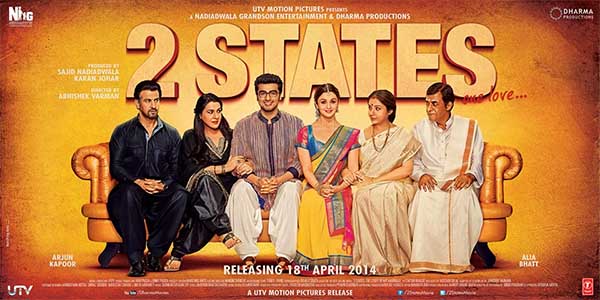 The upcoming Bollywood movie, “2 states”  is based on the best-selling novel by Chetan Bhagat written in the year 2009. The movie is to be released on 18th of April 2014. The movie is based on the romantic comedy which is directed by Abhishek Varman. It is the movie which is produced by Sajid Nadiadwala and Karan Johar. The film is starred with the actors like Arjun Kapoor, Alia Bhatta in the lead roles and other characters are Ronit Roy, Amrita Singh, revathy and many others. The movie is given by Shankhar-Ehaan-Loy and the movie is distributed by UTV Motion Pictures.

“2 States” is the movie which is a love story of a couple Krish Malhotra ( Arjun Kapoor) and Ananya Swaminathan (Alia Bhatt). These couples meet at Indian Institute of Management Ahmemabad and during that they fall in love with each other. As they become very serious about their relation, they took the decision of getting married and the problem starts to creep up. The problems come as they are from different states of the country and have different backgrounds. Krish happens to be from Delhi and comes from Punjab and Ananya comes from Tamil Brahmin household from Chennai. The movie seems to be very entertaining since the couple has to fight in order to end a lot of obstacles caused by the clashes of cultures.