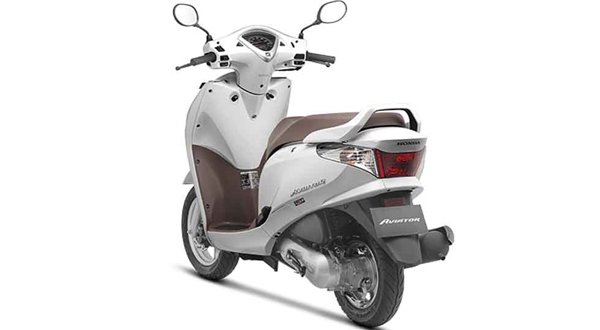 The Honda Aviator is 110 cc motor scooter manufactured by Honda, a reputed two wheeler manufacturing company. The original version of the Aviator was first introduced in the year 2009, however, the company made various changes in it with the passage of time and launched a new variant of Aviator.

The new variant of Honda Aviator is built on the same platform as of the old version. The scooter is furnished with high-quality seats and the space for keeping legs is also good. Also, the scooter possesses the height and weight of 1162 mm and 1802 mm respectively. The scooter is also wide having the wideness of 697 mm and weighs 105 kg. Furthermore, the wheelbase of the scooter is of 1256 mm and the scooter is 145 mm away from the ground.

Besides, the scooter powers itself with 4 stroke, OHC, single cylinder, air cooled engine which is capable of producing maximum power of 8 bhp and maximum torque of 8.77 Nm along with the displacement of 109 cc. The scooter, further, is equipped with telescopic front suspension and spring loaded hydraulic rear suspension.

In Nepal, Syakar Trading Company Private Limited imports the Honda Aviator and looks after its sales and aftersales services.