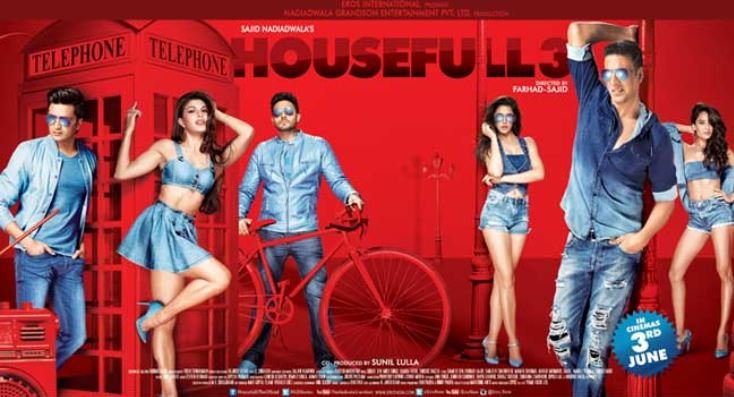 The comedy crew of Hindi movie Housefull 3 are back and today here we have exclusive review and box office collection report of the movie. Housefull 3 is the third installment of the franchise movie “Housefull”. The comedy movie has been co-written and directed by the Sajid-Farhad. The movie has been produced by Sajid Nadiadwala under his production banner of Nadiadwala Grandsons Entertainment. The movie distributed by the Eros International is a light-hearted comedy movie. It was released on June 3, 2016. The movie features huge star cast of Akshay Kumar, Riteish Deshmukh, Abhishek Bachchan, Jacqueline Fernandez, Nargis Fakhri and Lisa Haydon in the lead roles. The movie also stars Boman Irani, Jacky Shroff and Chunkey Pandey in pivotal roles.

The movie Housefull 3 is a light-hearted comedy and as usual like the other Housefull franchises, it is more or less mindless comedy. The movie starts with Batuk Patel (Boman Irani) and his daughters. His three daughters Ganga (Jacqueline Fernandez), Yamuna (Lisa Haydon) and Saraswati (Nargis Fakhri) love Sandy (Akshay Kumar), Teddy (Ritiesh Deshmukh) and Bunty (Abhishek Bachchan) respectively. The movie takes a turn when Batuk takes help of Akhri Pasta (Chunky Pandey) to fool their daughter to refrain them from getting married to their respective boyfriends. They were told that if they get married, their father will die. However, Ganga, Yamuna, and Saraswati understood the plan of their father and came up with a counter plan with their boyfriends. The story revolves around these main characters with little to understand but more to laugh at.

The story-line has nothing to offer for the movie. It is, in fact, boring and sometimes the mindless comedy can become a pain for 2 hours and 15 minutes. If there is anything that makes you laugh, that is the comedy timing. The male leads have made good efforts to entertain the audience, especially Akshay Kumar. However, Riteish Deshmukh and Abhishek Bachchan were not bad either. The female leads were not so impressive in the movie. The acting skills lacked the intent and it often went out of the track. The comedy timing was good but the narration was not up to the mark. As far as the comedy content is concerned, Akshay Kumar can make you laugh but most of the movie is forcibly hilarious. The punches are good in the movie but the narration is not so convincing. The movie has glamour and the X factor as well.

Housefull 3 has opened big in the Box Office and won the hearts of the audience. The first-week collection may easily reach 70 Crores as per the predictions of the trade analysts. The movie has racked up whopping 68 Crores in just over 5 days and that is remarkable. It will be interesting to see whether the movie reaches the 100 Crore marks. The movie does not have stiff completion ahead as well and the only big movie releasing next to it is Sultan and that is also well 25 days far. If the pace of the movie continues, then the movie can easily get ranked as one of the biggest hits of this year so far.