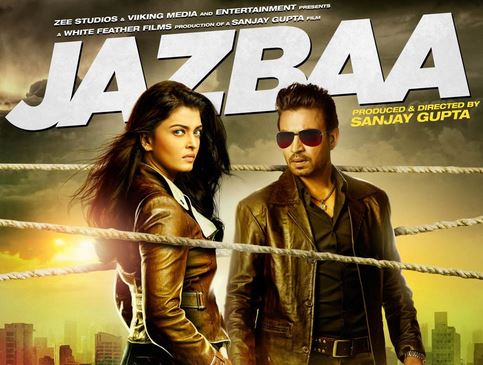 “Jazbaa” is one of the most awaited Hindi movies of the year as it marks the comeback of the gorgeous actress Aishwarya Rai Bachchan, who has returned to the industry after an extended motherhood break. Since her name in the industry is so big, she deserves an equally phenomenal comeback and for this reason, she has chosen this female oriented movie called “Jazbaa”. The movie has been directed by Sanjay Gupta and starring Irrfan Khan, Shabana Azmi, Jackie Shroff, Atul Kulkarni, Chandan Roy Sanyal and Siddhant Kapoor in the pivotal roles. It was released all over the world on 9th October, 2015.

“Jazbaa” is an action drama film inspired from a Korean movie called “Seven Days”. It revolves around the main protagonist, Anuradha Verma (played by Aishwarya Rai Bachchan), a hot shot lawyer, who finds herself entangled in a courtroom battle, in favor of a rape accused. The reason why she is forced to defend such a brutal and ruthless criminal is that she is being blackmailed by an unknown enemy, who has abducted her little daughter and wants the man freed in exchange of the girl’s life. Shabana Azmi plays the mother of the girl who has been raped and murdered by the criminal, played by Chandan Roy Sanyal. Irrfan Khan is Yohaan, the former policeman from the Mumbai police force, who plays the key role in investigating the entire situation to win his honor back. Interestingly, he also has a secret crush on the anguished mother he is trying to help out. The tale has the right twists and turns, with legal drama, drugs, rape and murder coming in at the right times in the right dose.

Though the film is all about the star power of Aishwarya Rai Bachchan, Irrfan Khan has proved yet again that he is not the one to be ignored. While most of the melodrama and screaming has been reserved for Aishwarya, the helpless mommy, Irrfan entertains once again with his winks, subdued dialogue and entertaining punch lines. In fact, Aishwarya seems over the top in some emotional scenes, with a little too much of glycerin put into use, but as they say, when you come back, you need to do it with a bang. Shabana Azmi impresses in her small yet important role, while Chandan Roy Sanyal fits well into his character. Atul Kulkarni shines as the public prosecutor while Jackie Shroff is equally good as an ambitious politician. The film seems over plotted at times, as the director tries to do a bit too much to catapult the lead actress back to her original position in the industry. A little restraint would have been better because a good actor is a good actor, you need not prove it again and again. Aishwarya fans will definitely make it to the theaters, to watch the movie at least once.

The much publicized Aishwarya Rai Bachchan comeback film “Jazbaa” made a decent start at the box office, with the opening day collection of Rs 4.23 crore, followed by Rs 5.59 crore and Rs 5.52 crore along the next two days. The total box office collection across the first weekend was Rs 15.24 crore. Since the movie has not gone great guns, the collections have been falling consistently along the second week.