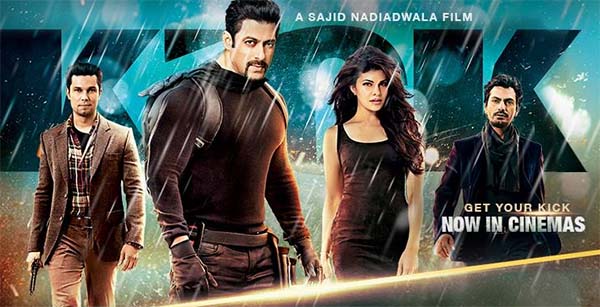 The biggest film of the year, Salman Khan starrer, “Kick” released on July 25, 2014 on the grand occasion of Eid. The movie is a re-make of a 2009 Telugu film, also called “Kick”. Besides Salman, it has some other big names on its star cast, including the beautiful Jacqueline Fernandez and the talented Randeep Hooda and the sensational Nawazuddin Siddiqui. Mithun Chakraborty and Saurabh Shukla play important roles in the movie. Chetan Bhagat has penned down the story of this movie and Himesh Reshammiya, Meet Brothers and Yo Yo Honey Singh have given its melodious music. “Kick” has been produced by Sajid Nadiadwala, who has also tried his hand at direction for the first time with this movie. It has been brought by the banner of Nadiadwala Grandson Entertainment and distributed by UTV Motion Pictures.

Salman plays an eccentric young man called Devi Lal, who would do just anything for an adventurous kick. Jacqueline is Shaina, a psychiatrist and the lady love of Devi. However, he is unable to stick to one job due to his restless nature and leaves Shaina heartbroken. He resurfaces as a bank robber, Devil, who eludes the super cop Himanshu (Randeep Hooda). Himanshu chases him to Poland, only tro encounter Shaina, his childhood friend who is mourning after being left by Devi, incidentally Devil. What follows is a cat and mouse game, interwoven with romance. The storyline is gripping while all characters seem in place, each on being given his/her own space. They have not over shadowed each other, despite their immense talent.

Sajid Khan has made his directorial debut with this movie and has done his job well enough. He has managed to juggle his talented star cast in a skillful manner. The movie has been shot extensively in beautiful locales of Poland and also in Mumbai. The action scenes are wonderful, true Salman Khan style. Besides great action, the movie has a hefty dose of thrill, romance and comedy. While Salman looks fresh and young, Jacqueline is not just a pretty face and gets her share of limelight in the movie. Randeep impresses as the impressive police officer while Nawazzudin is great in his negative role. The music of the movie is already doing well on the charts. The title song of the film has been voiced by the popular rap singer Yo Yo Honey Singh, while another hit song Jumme Ki Raat, the music director was Himesh Reshammiya and sung by Mika Singh and Palak Mucchal is expected to do great business, keeping in view the release of the movie being timed at the festival of Eid. Overall, a pure masala entertainer, Bollywood Ishtyle!!

Salman Khan, Nadiadwala Grandsons and the occasion of Eid, together make the perfect recipe of a big hit. Kick has literally taken the box office by storm, in India as well as overseas. The movie has made a total collection of a whopping Rs 148 crore in its first 6 days on box office. The worldwide gross collections are expected to cross the 200 crores mark soon, which is a phenomenal figure. The film is expected to continue with its record busting collections in the coming days too. A well deserved hit for Bollywood!!