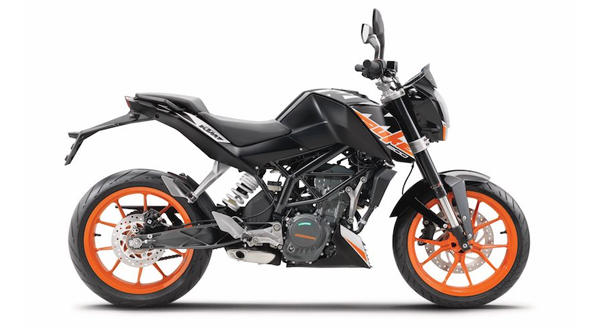 The new Duke 200 is built on the same old platform, however, the bike has been refreshed with some new notable changes. The new Duke 200 is featured with new graphic designing, orange-colored rim, wide mirrors, improved seat, and many other things which would attract the customers.

Moreover, the Duke 200 features the height and length of 810 mm and 2050 mm respectively. Also, the bike has got the wideness of 730 mm and the bike weighs 125 kg. Besides, the front wheel maintains the gap of 1040 mm from the rear wheel and the bike is 165 mm far from the ground.

Also, the bike is equipped with single cylinder, 4 stroke, spark ignition, liquid cooled engine. The particular engine is capable of producing maximum power of 25.3 bhp @ 10000 RPM and maximum torque of 19.2 Nm @ 8000 RPM along with the displacement of 200 cc.

KTM’s bike get assembled at Bajaj Auto and the company (Bajaj) exports KTM Duke 200 in Nepal under the dealership of Hansraj Hulaschand & Co. Pvt. Ltd.