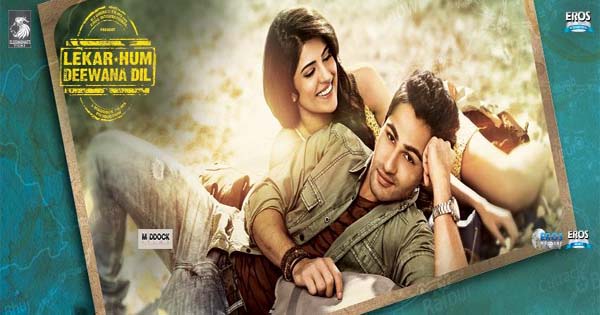 This film “Lekar Hum Deewana Dil” is the debut film of two newcomers, Armaan Jain, the grandson of Raj Kapoor family and son of Reema Jain and Deeksha Seth, in the lead roles. Though Deeksha Seth has done a few movies down South, but this is her first Hindi film. The title of the film is a take from a popular song with the same lyrics, from Yaadon Ki Baraat (1973). This film is the debut directorial venture of Arif Ali, the brother of the hit director, Imtiaz Ali, while it has been produced by Saif Ali Khan, Dinesh Vijan and Sunil Lulla under the banner if Illuminati films and Eros International, which has given the hit film “Cocktail” last year. The music of the film is given by A R Rehman, while the lyrics of all the songs have been penned down by Amitabh Bhattacharya. The film released on July 4, 2014.

The story two of the film is about a happy-go-lucky young couple, Dinesh Nigam (Armaan Jain) and Karishma Shetty (Deeksha Jain), both rich and cool college friends, who love partying and enjoying life. Everyone knows that they are in love, except the couple themselves. But they end up making an impulsive decision to elope and get married, when the girl is forced by her tyrant father to go for an arranged marriage. They reach a jungle during their runaway, but end up realizing that they made a wrong decision and want to end their nuptial knot. It seems that the honeymoon period ends too soon for the couple and they start seeing problems in everything the other does. Eventually, the same old story follows, with the boy and the girl getting together in the end. Sadly, the film which seems promising in the first half, ends up as a predictable and dull story in the end, being dragged along the second half.

The chief drawback of the film is a shoddy screenplay and its length, which literally tests the patience of the viewers. It seems that Armaan Jain has gone a bit too far for giving a genuine performance, while Deeksha looks better on the screen and shows more promise, as her experience in the South Indian film industry comes to her rescue. The songs, though composed by A R Rahman, lack his magical touch. Some parts of the film, such as the jungle sequence seem totally pointless and have nothing to do with the original plot. Even the supporting actors have been unable to show a spark due to lack of depth in the story of the film. This film somehow reminds of the film “Saathiya”, in which a young couple played by Vivek Oberoi and Rani Mukherjee fall in love, get married and end up with constant quarrels and fights, coming together in the end, but this one is far more boring and predictable. The writer director Arif Ali has failed to bring originality in the plot, which is the main cause of its lagging behind. The film seems too long and is bound to bore the audience.

“Lekar Hum Deewana Dil” had to compete with two big films, “Bobby Jasoos”, which was released this week and the big hit of the last week “Ek Villain”. The slack screenplay, weak direction and amateur performances are the main cause of low box office collections, besides serious competition from the other films released in near proximity. The box office collections of “Lekar Hum Deewana Dil” over the first week have been disastrous, making a total of just about Rs 50 lakhs on the opening day and a meager amount of Rs 1.5 crore over the first weekend. The film has not got good reviews, which has also accounted for its weak performance on the box office and the new comer cast has failed to attract the audience to the theatres. It has turned out to be one of the lowest grossing films of the year and there is also not much hope of recovery in the coming days, too.