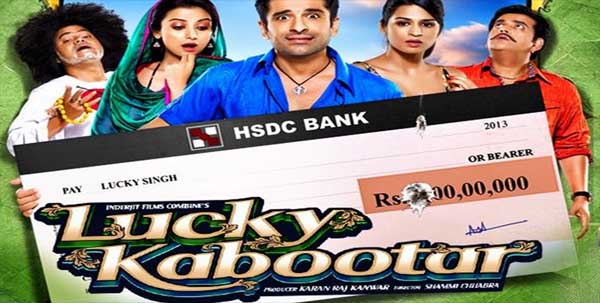 This Bollywood release is targeted for the audience who enjoy the insensitive humor attempt in a movie. It won’t be wrong to say that the film lacks freshness or originality and is more or less dull. The story of the film revolves around the romantic comedy plot line, but the film does not come even close to justify both of these words.The movie is set release on 18th April 2014.

The story of the movie revolves around Lucky (Eijaz Khan) who is a salesman and opposite to his name is down on his luck. He sells tractors and is married to a girl named Lakshmi (Kulraj Randhawa). Lucky makes no even a single bone of being disgusted by this girl. On the other hand Lucky is in love with the local goons’s (Ravi Kissen) sister Kammo (Shradha Das). He is so much in love with her that he goes to a local Baba who is known as Sexy Das (Sanjay Mishra) who more or less looks like a mixture of Rajneesh and Satya Sai Baba, to help him to make Kammo fall in love with him. This sexy Baba performs a lot of obscene acts, making his female disciples pander him to each of his whims, speaks in double entendre manner etc. There are his two most loved and favored disciples names Pen Drive and Hard Drive. A lot of thanks to Jeevan’s style villain acting of Sanjay Mishra, which gives some moments of relief in the film.

Unfortunately we have to say that the script of the movie lacks the direction totally and it looks like the shape plot of the film was decided after the pre planned formula. It is very obvious that the desire of a married man for a woman who is not his wife something that will take you to heights. One can find nothing in the film except bad vulgar jokes and sexual innuendos.

Later in the movie, certain events leads to Lucky losing his wife, wins a windfall as well as Kammo. One could also see sequences related to “shradh/death rites” in between the movie, while on the other hand the object of this entire death rite is shown alive and looking at the preceding. It is very obvious that the title of the movie justifies the story line as before the windfall Lucky used to be a foolish and diffident man who didn’t value money and after the windfall his luck shines and he gets whatever he desires for.

Overall the movie is not worth risking one’s peace of mind as well as money. Although a lot of other characters are added in the film like a gay Punjabi guy who is called Pussy, a lady leader who do not thinks before pronouncing the Hindi words wrong and making them sound like vulgar phrases, a woman in love with the goon, who drenches herself in milk whenever at each and every opportunity while the camera gives the audience a close look at her assets, just to add the fun factor to the film. But however it fails to save the film from being a bore and attract audience towards it.