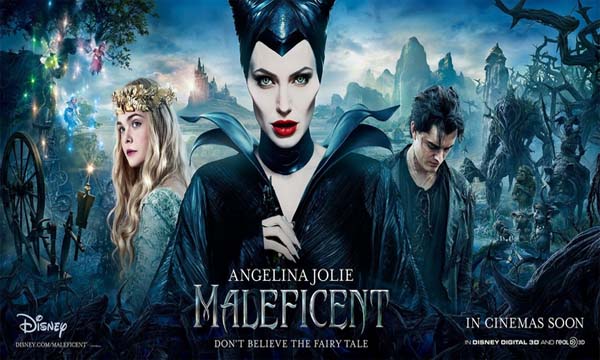 This incredible narrative of the Villain’s version of the popular Disney Fantasy tale ‘Sleeping Beauty’ reveals the hidden twist of who the real villain actually is. The story is set at a time when the two kingdoms of the faeries and Humans lived adjacent to each other. One day a human boy reaches the faerie Kingdom, The Moors. The boy is caught by the pixies but is rescued by Maleficent little faerie who lets him go back to his kingdom. Although they decide never to meet, the meeting continues for years. The boy, Stefan kisses Maleficent at her 16th age, but stops to come for her afterwards.

The human king Henry turns his evil plans to conquer The Moors, upon which Maleficent rises to the power of queen in order to save her kingdom. Henry announces to hand over his kingly post and daughter Leila to the killer of Maleficent. Stefan who harbored the same desire, visits Maleficent in the night and spikes her drink with a sleeping concoction. Maleficent sleeps off but Stefan realizes he cannot kill her. Hence, he tears her wings off with an iron and submits them to the king, to become the king and marry Leila. Maleficent makes herself a walking staff and journeys, to the castle that is abandoned far away to wail and weep. Upon reaching there, she takes pity on a raven, transforms it into a human bird, and finds through it about the crowning of Stefan, which enrages Maleficent to return to her kingdom as the Evil Queen of the Moor.

The christening of Stefan’s daughter Aurora takes place in the castle for which Maleficent appears without any invitation. She then curses Aurora to fall into a perpetual state of slumber on the night of her 16th birthday after pricking herself on the spinning wheel. However, immediately after, she takes pity on the little one and includes that the cure can be broken with the true love’s kiss. Stefan orders to burn every spinning wheel in the country and sends his daughter along with three pixies to a faraway place.

In the due course of time, Maleficent’s takes the princess to The Moors and hopes that the invincible curse would take no effect in the magical kingdom. Nevertheless, Aurora comes to know of the origin of the curse, runs away to her father, and falls into the slumber, upon being pricked by the spinning wheel in the castle’s dungeon. Maleficent brings the man Aurora loves to kiss her, but nothing happens. Depressed Maleficent kisses Aurora to bid goodbye but Aurora comes to life, the moment after the kiss of her godmother! Trying to feel from the castle, Stefan dies after the fight with Maleficent.
Maleficent makes Aurora the Queen of both the kingdoms and everyone lives in peace.

The film has gotten magnificent fan ratings though the critics have not praised it sky-high. Rotten tomatoes has rated it 5.7/10 and Imdb- 7.5/10. Metacritic has rated it 56/100, critics like Robbie Collin, and such has praised Jolie’s acting debut after a span of 4 years’ dormancy to be magnificent but the movie lacking sufficient enchantment.

Angelina Jolie, Sharlto Copey, Elle Fanning and Sam Riley play the lead roles while the direction is by Robert Stromberg along with producer Joe Roth.

As of the date today, the film has crossed $170 million while the total budget of the movie was $180 Million.
The film has collected around a 100 million from box office overseas and the opening day collection has been $60 Million.