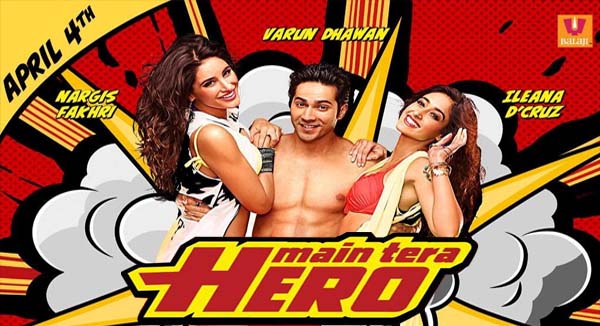 The movie Mein Tera Hero was released on 4th April 2014 in all Indian theaters and till date has managed to make revenue of Rs 38.48 crore. The movie made a solo entry on 4th April and earned a standard income of 6 crore on the first day at box office. The success of the movie has led to surpass the movies like Shaadi Ke Side Effects and Hasee Toh Phasee.

Mein Tera Hero is full of romance, action and comedy and is running successfully in all Indian theatres. Varun played a key role in the movie directed by David Dhawan. The movie was startled with two female stars named Ileana D’cruz and Nargis Fakhri who made the movie to bump the first day of release at box office.
David Dhawan one of the famous directors of the Bollywood industry is known for making comedy movies of matured standard like Hero No. 1, Coolie No. 1, Biwi No. 1, Deewana Mastana and Haseena Maan Jaayegi has made another recon to his career.

Story involved Varun one of the upcoming stars of Bollywood industry named as Sheenath Prasad, a notorious boy in Ooty. Sheenath drops out from college to pursue his education in Bangalore where he falls love with Sunaina (Ileana). In contrary Sunaina was forced to marry Angad (Arunoday Singh) a local police officer who was known as more terrorising gangster of that area.

The movie Mein Tera Hero has breeze with considerable ups and downs in the first of the release it recorded a 6.60 crore on Friday, 8.03 Crore on Saturday, 8.10 crore on Sunday, 4.20 crore on Monday, 4.80 crore on Tuesday, 3.4 crore on Wednesday and 3.35 crore on Thursday. After a first week downfall the Bollywood romantic comedy movie Mein Tera Hero is likely to get back its position again.

The sixth day of Mein Tera Hero at box office is known to the beginning of the weekdays but considerably the movie made a downfall at box office because of T20 World cup. With an expectation to rise after the T20 World Cup but it did not. Till day the overall count is considered to be a decent and alluring as compared to the release of other movies released this year.

Ongoing success with Mein Tera Hero fledged Balaji Telefilms threw a grand party to all its crew and cast members last Wednesday. The party was succeeded with the presence of some of the eminent stars of the industry like Sonakshi Sinha, Alia, Arjun Kapoor, Ekta Kapoor, Divya Dutta and others.

The film was promoted by lead actors and the song was released in accordance to hammer all updates made on this movie. With expectations the movie is likely to rise its earning at box office.