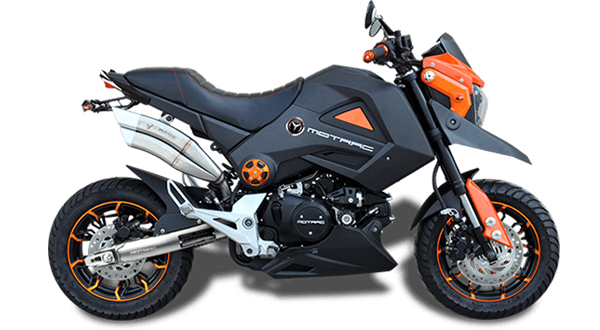 The Motrac MX-EF1 has been built on the body design of the E-MX. However, the extensions of the MX-EF1 look much more muscular than of the E-MX. The MX-EF1 has been provided with single seat which is raised in the rear end. The bike has also been featured with unique dual exhaust. The surroundings of the headlight also give bike an attractive look.

Further, the Motrac MX-EF1 has been powered with single-cylinder, 4-stroke, air-cooling, SOHC with balance shaft, tilting 10 degrees leaned, 124.6 engine which is capable of producing maximum power and torque of 9.11 bhp @ 7000 RPM and 9.5 Nm @ 5000 RPM respectively. Besides, the bike is equipped with double inverted oil spring damper front suspension and independent mono rear suspension.

Furthermore, Motrac has been exporting the MX-EF1 in Nepal under the dealership of SLR Techno & Trade Pvt. Ltd.