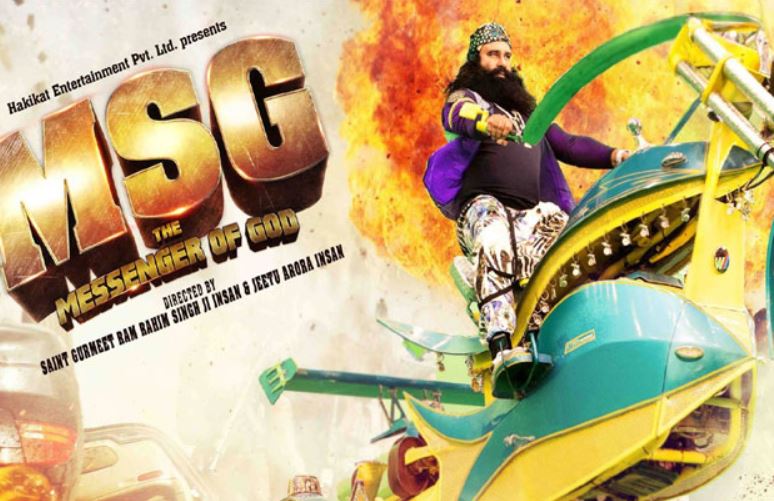 India is already seeing the popularity of a number of spiritual gurus in the recent times and MSG series of movies is one of the steps in the direction of popularizing one of these iconic characters, Gurmeet Ram Rahim Singh Ji Insan. MSG-2 The Messenger is the second movie in this series and follows the first part, which has had its fair share of controversies. MSG 2- The Messenger is an all in all Gurmeet Ram Rahim Singh Ji Insan’s movie, with him playing the lead, singing the songs and directing it too. Others in the star cast are Charanpreet Insan, Arpit Ranka, Satyam Insan, Honeypreet Insan, Sahil Insan, Shan-E-Meet Insan, Rooh-E-Meet Insan, Sukhwinder Singh Insan, Kaynat Toor and Gurpreet Kaur.

Truly speaking, MSG-2 The Messenger is a film without a plot, with the entire show narrating the great deeds and miracles of Gurmeet Ram Rahim Singh Ji Insan. The script covers the superhuman stunts of the Guru from the beginning till end, which are bound to be applauded by his dedicated following but are meaningless for the regular viewers. He is shown doing water stunts, pure Hrithik Roshan style done in Bang Bang, which induce laughter from the audience. The plot also covers some strange subjects like the ill effects of non vegetarian foods and social evils prevailing in the society, with the story focusing around a corrupt politician and how the leader rescues people and the society as a whole, from his vices. Gurmeet Ram Rahim Singh Ji lays the great spiritual father or Pitaji, who aim is to provide solace and the right direction to all the lost souls of the world.

To those who have not seen the prequel of the film and do not know what to expect from this one, MSG-2 The Messenger can come up as a big shock. The opening scene itself, showing two boys rescued from an inferno by this Guru, is enough to give an idea what the film is going to be like. The costumes are tacky and the dialogues are too loud. The songs also have nothing to be appreciated, as they are once again a tribute to the great leader, who thinks he is perfect at all the arts. His action and sword fights are incredulous too, adding a comic value to the entire film. No doubt, the maker has put in a lot of money in the film, as far as technique and grandeur are concerned, what it really lacks is finesse. You can actually avoid this one as it is a sheer waste of time, except only if you are a devout follower of MSG-2 The Messenger.

MSG-2 The Messenger hit the silver screen on 18th September 2015 and it has once again cashed on the incredible following of the Guru, performing better than the rest as far as collections are concerned. The first day collection was an amazing Rs 14.20 crore, followed by Rs 13.66 crore and Rs 14.83 crore on the second and third days respectively. The total across the first weekend reached a tumultuous Rs 42.69 crore. In fact, it is all set to step into the 100 crore club very soon.