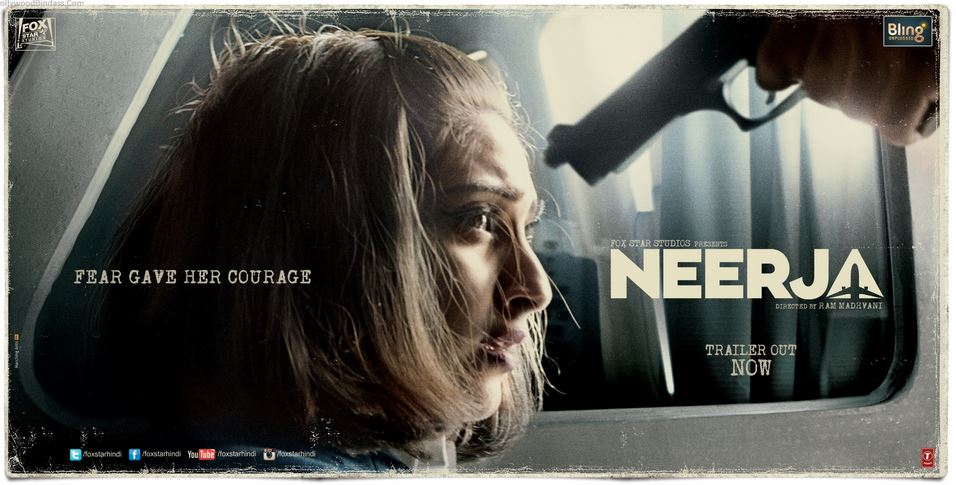 Neerja is one of the most anticipated and celebrated Bollywood Film this year. The biographical thriller is inspired and based on the real life incident of Neerja Bhanot, young air-hostess of Pan America Flight. The movie is directed by Ram Madhvani and has Sonam Kapoor in lead role. The movie has been released on February 19, 2016 under the banner of Fox Star Studios and is produced by Atul Kasbekar. This is one of the movie that has not only been critically acclaimed but also been emotionally connected to the people because of the story and the incident.

The plot of the movie revolves around the real life incident of Pan Am Flight 73. The flight was hijacked by Libya backed Abu Nidal Organization in Karachi, Pakistan. The movie starts with Neerja who was a model and was working as a air-hostess as well. She had a bad past when her husband, a professional based in Doha harassed her for dowry. Neerja (Sonam Kapoor) recounts her old days and expresses her feeling to her mother (ShabanaAzmi) as well before boarding the Pan Am Flight 73. However, soon it was realized that the flight has been hijacked at Karachi as the terrorists come as the security guards with the Libyan Diplomat and announces the hijack. However, Neerja was very quick to inform the same to the cockpit and the American Pilots escaped from overhead. The terrorists were looking for the Americans and they shot one Indo- American in front of the Pakistan Negotiators. The battle continues as they asked Neerja and other attendants to collect the passports. They were not able to find the Radio Engineer as Neerja asked him to stay quiet. Neerja on the other kept hiding the passports. However, the negotiations started and things started falling out between the Pakistani Negotiators and Terrorists. However, as the auxiliary power of the plane was off, the terrorists started firing randomly. Neerja then saved 360 lives and died at the age of 23 years.

The performance of the movie was completely based on the script and Sonam Kapoor. This has to be the best movie for the actress and she has done beyond expectation. The movie has been thrived by the story telling, narration, direction and the matured acting by Sonam Kapoor. Overall, everything about this movie was just perfect and the bravery of Neerja was reintroduced to the modern people.

Neerja has started an excellent run at the Box Office and is still going strong. The movie in its second week was as strong as it can be. Till the last report of March 1, the movie has earned whopping 50.12 Crores in India and another additional 20 Crores in the Overseas. The movie is still rock solid and it is expected that the India earning should reach to 60 Crores by the end of 3rd week. Lifetime business of the movie including the overseas is expected at around 80-90 Crores. The movie has got special boost as the movie was made Tax Free at many places.